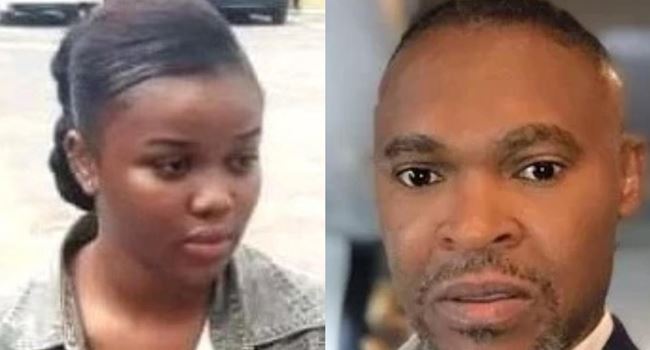 The former Chief Executive Officer of Super TV, Michael Usifo Ataga, (50) was recently murdered inside an Airbnb service apartment in the Lekki area of Lagos. A 300 level Mass Communication student of the University of Lagos, Chidinma Adaora Ojukwu, (21) was said to be behind the murder. Miss Ojukwu, obviously terrified after the commission of crime, had been traced to her father’s house and arrested and paraded by the police.

She had owned up to the heinous crime by ‘singing’ and lamenting that she regretted why she killed the ‘loverboy’ and that she was afraid of her life! She said she first strangled the late billionaire before stabbing him to death in self-defense! According to her the late big man of the media ‘raped’ her and continued making more advances which infuriated her.

Chidinma told detectives at the Homicide Section of the State Criminal Investigation and Intelligence Department, SCIID, Yaba in Lagos that she was able to overpower the deceased because he was weak. She reportedly claimed that the late Usifo was feeble after taking three wraps of Rohypnol while she took one wrap.

Detectives were said to be on the manhunt for a suspected drug addict and internet fraudster (names withheld), who Chidinma claimed aided her to falsify the deceased’s documents after she escaped from the service apartment leaving his lifeless body behind.

If it was not a premeditated murder then how could the wanted scammer and drug addict have gained access to the apartment? The forged documents with which Chidinma used to escape from the apartment was not produced on the spot. It was done in advance perhaps at ‘Oluwole’!

And after killing Ataga why must the criminal at large help Chidinma to make huge withdrawals from Ataga’s bank account?

There is much more to this strange story than meets the eye. Who killed Usifo Ataga? And why? We are forced to ask these questions because the cock and bull story being narrated by Chidinma should better be told to the marines. The truth about the sordid incident is not yet fully out.

Ms Ojukwu is a dashing beautiful girl who has recently revealed herself to be a ‘Jezebel’ used by undesirable criminal elements to achieve a dastardly act. Seeing her photograph online one was shocked to discover the ‘innocent’ face of a girl young enough to be the daughter of the deceased Ataga.

Pray, why did Chidinma (an Igbo girl probably born and bred in Lagos) go to the extent of killing a benevolent ‘sugar-daddy’ who, prior to his demise, had opened his financial vault via a blank ATM check to her? Who sent her on the deadly mission and for how much? Who turned this ‘angel’ into a monster or vampire?

Conveniently yet unconvincingly she had blamed it on the consumption of alcohol and hard drug? So she was high on drugs and stupefied by liquor when she hacked Usifo to death? Arrant nonsense!

We refuse to take her position as motivation for the crime. Even if she was drunk and high on narcotics as she claimed how could that state of stupor have led to murder? If every murderer could plead state of stupor, weed smoking or sniffing of cocaine and drinking of ‘vodka’ as justification for taking a life then we are all in trouble.

The murder in Lekki demonstrated yet again how violent our society has become lately. Assassination has become a means of settling disputes. The late Ataga must have fallen victim to a set up carefully planned and executed. He lowered his guard and fell into a trap.

According to his family bruises were visible and noticable in his body following an autopsy. There must be a bloody battle inside the room where the late handsome billionaire was overpowered and killed gruesomely. He must have been bound, gagged and tortured before being stabbed ‘multiple times’ to death.

Perhaps the Rohypnol he took (if what Chidinma said was believable) must have weakened him to the extent that resistance was nigh impossible.

Could it be that a business deal that went terribly bad between him and his partner(s) led to the decision to take him out permanently? Or he was gunning for contract and other competitors thought it wise eliminatinng him in order to corner same? Something must be blamed for this horrible murder!

Besides, while awaiting the final definitive report of police investigation to unravel the mystery behind the butchering of Usifo, we must raise the issue of infidelity and adultery among the married men in Nigeria.

If the late Ataga was not a philanderer then he would not have fallen victim to this kind of cruel death. If he was loyal sexually to his wife as a responsible family man then his killer(s) would not have gotten him so cheaply.

Ataga must be hell-bound for trying to commit adultery and meeting his waterloo instead. That is how the cookie crumbled! When you go for young girls for ‘refreshment’ whatever comes upon you should be considered your comeuppance.

It is surprising that in this century fraught with digital intelligence and ‘diversification’ of sophisticated crimes Ataga fell ‘mugu’ to his enemies. Pity!

[Opinion] Where did this Zulum emerge from?