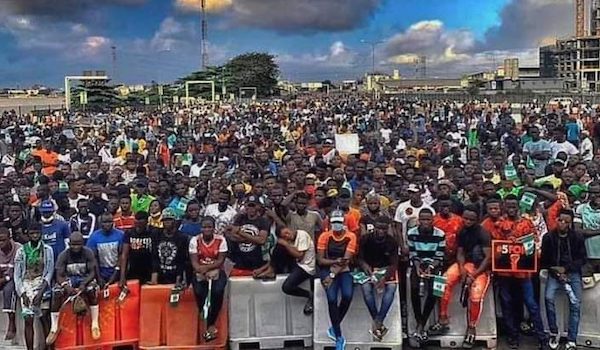 In the recent history of Nigeria, no issue has divided the citizenry as the murder of #EndSARS protesters at the Lekki Toll Gate on October 20, 2020, with a lot of friendships, alliances, and even familial bonds destroyed due to various dispositions and perspectives regarding events which coalesced on that unforgettable evening.

This division amongst the citizenry was further worsened by the repeated gaslighting techniques deployed by the Federal government in order to erase the massacre from people’s memories.

Enter Lai Mohammed, the Minister of Information and Culture, who has repeatedly criticised reports of the killings while trivialising the pain and deaths of victims and families. Nowhere was this homicidal disposition more vivid than an utterance he made on October 20, 2021, a year after the infamous massacre.

Addressing a press conference in Abuja, Mohammed had described the event at the tollgate as a “phantom massacre”.

“Today marks the first anniversary of the phantom massacre at Lekki Toll Gate in Lagos, which was the culmination of an otherwise peaceful protest that was later hijacked by hoodlums,” the minister said.

“At earlier press conferences, I had called the reported massacre at the toll gate the first massacre in the world without blood or bodies.

For twelve agonising months, Nigerians waited with bated anticipation as the Lagos State Judicial Panel unravelled events that led up to the murder of innocent protesters at the Lekki Toll Gate; the report was eventually published (or leaked depending on whom you believe) on Monday, November 16, 2011.

A damning excerpt from the report reads, “At the Lekki Toll Gate, officers of the Nigerian Army shot, injured and killed unarmed helpless and defenseless protesters, without provocation or justification, while they were waving the Nigerian Flag and singing the National Anthem and the manner of assault and killing could in context be described as a massacre.

“The Panel also found that the conduct of the Nigerian Army was exacerbated by its refusal to allow ambulances render medical assistance to victims who required such assistance. The Army was also found not to have adhered to its own Rules of Engagement.

“The Panel found that the Nigerian Police Force deployed its officers to the Lekki Toll Gate on the night of the 20th October 2020 and between that night and the morning of the 21st of October, 2020, its officers shot at, assaulted and battered unarmed protesters, which led to injuries and deaths.”

How about that for evidence, Mr Lai Mohammed. But it should not be surprising since the majority of those at the helm of affairs actually have disdain for the youth segment of the populace. This is evidenced in the policies enacted to snuff lives out of the average Nigerian youth before they embark on life’s journey.

The minimum requirement the Nigerian youth seek from the government is a thriving and enabling atmosphere to maximise their potentials and grow the economy; not engage in mental gymnastics, justifying a massacre due to the agitations for a better policing system which will cascade into all facets of the economy.

Nonetheless, trust the handlers of the Federal Government to conjure asinine responses to the report by the Lagos Judicial Panel —it would make for a fascinating spectacle watching these two elephants slug it out.

In further evidence of how worthless the lives of Nigerian youths are (home and abroad), Itunu Babalola, a Nigerian woman died in Ivorian custody after being imprisoned on thrumped-up charges by the authorities in the country.

Babalola’s travails were brought to light by David Hundeyin, a journalist who repeatedly tagged the Federal Government, the Nigerians in Diaspora Commission (NIDCOM) and other agencies in order to ensure her release.

Whether due to lack of concern or gross disregard for her plight, the authorities refused to intervene until her death was announced on Sunday, November 14 only for Abike Dabiri-Erewa, the NIDCOM Chairman to churn out a sentimental speech about the unfortunate efforts of the agency towards securing the release of Babalola.

She said Itunu died at a time when the Nigerian mission in Côte d’Ivoire had paid and engaged the services of a lawyer to handle Itunnu’s appeal case.

“Unfortunately, Itunnu died abruptly while all hands were on deck to seek both legal and diplomatic intervention for her by Nigeria.

“She was sentenced to 20 years imprisonment while the Nigerian mission in Cote d’Ivoire supported by the Nigerian community, got her a lawyer, paid part payment of legal fees for the lawyer, to appeal the judgment, while at the same time seeking diplomatic intervention from the Nigeria Ministry of Foreign Affairs.

“Her death, will, however, not stop the appeal in court in order to vindicate her of the charges against her”, Dabiri-Erewa stated.

Wonderful speech, ma’am, but most Nigerian youths are better off on their own rather than await help from a government that will never respond to their yearnings.

The government continues to kill the youth yet, they wonder the reason for the appalling state of the economy; one would think it is rocket science.

OPINION…2023 election: The north is indispensable