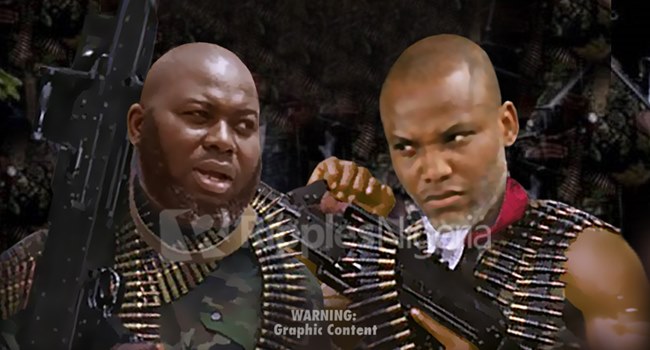 Recently an assemblage of Northern groups (numbering more than three scores and a dozen) under the auspices of the Northern Consensus Movement had disclosed that it would pay a reward of N100 million to persons who could produce the fugitive leader of the Indigenous People of Biafra (IPOB), Nnamdi Kanu, for the continuation of his prosecution for alleged treason in Nigeria. The group alleged that Kanu and the IPOB security outfit known as the Eastern Security Network (ESN) were behind recent numerous attacks on northerners in the Southeast region.

Therefore, they were placing a bounty of N100 million as an offer to anyone who could produce Kanu alive, hale, hearty and uninjured to them for onward delivery to the security agencies for the continuation of his prosecution. Dr. Awwal Abdullahi Aliyu who spoke on behalf of the Coalition had urged the United States of America, the United Kingdom and the European Union to assist in the IPOB helmsman’s apprehension and repatriation to Nigeria so as to face the charges against him.

Well, if the so-called Northern Consensus Movement are relying on the Western democracies or the United States under President Joe Biden to help arrest and deport Kanu to Nigeria for Buhari to jail or kill him then they are day-dreaming. No responsible government elected democratically would listen to such entreaty from an amorphous organization. Nnamdi Kanu may be seen as a ‘terrorist’ or a ‘criminal’ in Nigeria but abroad he is seen differently. He is regarded as a freedom fighter.

No one knows for sure Kanu’s address anywhere. He could elect a couple of cities and countries for residence depending on his mood or convenience. But tracking him down is possible as he is not living in Mars or Jupiter! Sometimes he is spotted in Israel praying or visiting historic Jewish sites. And at other times in United Kingdom or United States.

Dr. Awwal Abdullahi Aliyu and his ‘movement’ should occupy themselves with something more productive than placing a bounty or ‘fatwa’ on Kanu for standing up in defense of his marginalized people of the south-east. Campaigning for self-determination non-violently is not a crime. What constitutes a crime is doing it violently as lives and properties could be wasted in the process of making chaos or anarchy prevail.

Freedom fighting is not a vocation for the faint-hearted. A freedom fighter has challenges strewn around him. You have traitors (Brutus or Judas) haters, and agents of power at your trail. Nnamdi Kanu is not an exception. By electing wilfully and determinedly to see Biafra become an independent nation he must know that he remains a marked man. In the course of the struggle a lot of obstacles could be thrown your way. As the late South African anti-apartheid hero, Nelson Mandela, put it succintly: “there is no easy walk to freedom”!

Penultimate week the Niger-Delta ‘warlord’, the leader of the Niger Delta Peoples Salvation Force (NDPSF), Alhaji Mujahid Asari Dokubo, was in his best provocative invective element. He had released a video uploaded online in which he fired yet another salvo towards Mazi Nnamdi Kanu, the fugitive leader of the Indigenous People of Biafra (IPOB). He called him unprintable names, some derogatory and others demeaning. Without mincing words he declared that Kanu was not only a ‘con-man’ but a ‘criminal’! He promised to hunt down Kanu and “destroy this evil empire that is working as a hindrance to the restoration of Biafra.”

Dokubo must have been livid following the claim by some IPOB elements that he was given a hefty amount of money. He said: “they brought money to Cotonou to give to me — N20 million. We are waiting for them to bring the evidence. They came to Cotonou to meet with me and I hosted them. They did not bring a dime” Dokubo alleged that Kanue wanted to destroy Onyeama, Ekweremadu and other Igbos. “He wants to destroy everybody and the Igbo people are keeping quiet” — he had lamented and continued: “Biafra is your business now, you have no other avenue for gainful income. It is a pity how Igbo people have fallen for this evil, but your time is up”.

Nnamdi Kanu had reacted moderately to the Dokubo allegations and vituperation. He hit Asari back via Twitter. “Tell him I don’t even react to a mask-wearing (President Muhammadu) Buhari imposter talk less of a hungry filthy pig that conned me of 20 million naira!….When world leaders or respected commentators talk about Biafra, I respond. I can’t dignify a petty pipeline security guard with a response. He should focus on his business ventures and leave freedom fighting to freedom fighters”.

By that public altercation both Dokubo and Kanu are suspects! Money and power must have been at the root of their spat. Dokubo seems to harbour some grudges against Kanu and that has created an animus between them, one hard to reconcile. At a time Kanu and Dokubo were best of friends. Kanu was rumoured to have promised Dokubo a ministerial portfolio (Defense) in the event of Biafra becoming a sovereign reality.

As they fell out, however, Dokubo last March took everyone by surprise by declaring the formation of the Biafra Customary Government (BCG). Dokubo became the defacto Head of the imaginary government whileUche Mefor, who once worked under Kanu, was named the BCG’s Head of Information and Communications. Since then nothing more is ever heard of the government, a phantom government.

Dokubo has a long history of nuisance in Nigeria. When he was a militant fighting the federal government over oil revenue and pollution of their ancestral lands he committed a lot of atrocities, sabotaging oil and gas infrastructures. When he embraced the amnesty programme decreed by the late President Musa Yar’Adua pocketting the millions that came with it and depositing his weapons he suddenly found himself rich and important. He has since arrogated to himself the struggle for Biafra!

While Dokubo may be jealous of Kanu’s rising profile and his apparent success in internationalising the Biafran nationhood agitation the truth is that between Kanu and Dokubo someone is not telling us the truth, the whole truth.

Pray, why would Asari Dokubo deny receiving money from Kanu if he actually did? Was the money to ‘bribe’ him or for what purpose? Why would Kanu ‘lie’ about giving money to Dokubo if actually he did? Or did the money in question disappear on transit? That is, were those sent to deliver same actually deliver as instructed? Or shared the money among themselves and told their principal that his message was delivered?

Something does not sit right here! It is not enough for Kanu to challenge Dokubo to swear on the Quran that he never received IPOB money way back in 2016. It is not enough for Dokubo to ask Kanu to also swear on the Bible or the Torah, the Jewish Holy Book, if he had not been collecting money from South-East Governors and prominent Igbos at home and abroad in order to sustain the struggle.

The truth they owe us is how the alleged millions of Naira changed hands in Cotonou or elsewhere. And how money has become a dividing factor in their relationship. And above all, how the Biafran struggle has been turned into a ‘business’ venture, a money-making machine. Unless they tell us the truth we cannot take them serious any longer.

[Opinion] NIGERIA – Enough of the rape!

[OPINION] INEC polling units and the future of elections