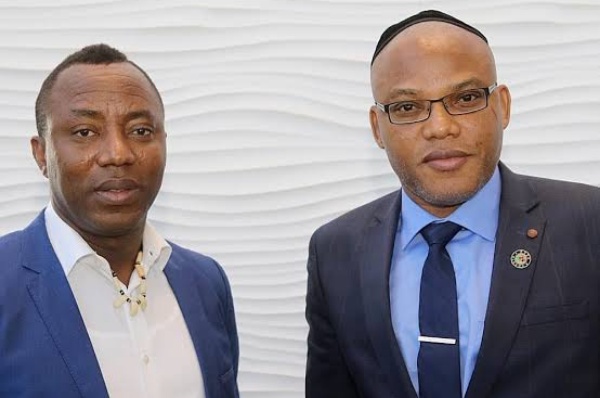 Mazi Nnamdi Kanu, the detained leader of the proscribed Indigenous People of Biafra (IPOB), appeared before Justice Binta Nyako of the Federal High Court in Abuja twice last week. The federal prosecutors had increased the charges to fifteen, the principal of which remains those of treasonable felony and terrorism. As usual the lawless Department of State Services’ agents prevented interested stakeholders, journalists, lawyers and observers, from gaining entrance into the court room. In any democracy anywhere in the world worth its name the freedom to go in and out of court rooms is constitutionally guaranteed.

But what was more terrible than the DSS invasion of the FHC in the FCT was watching a horde of hired urchins, armed with stones and cudgels, descending on civilised Nigerians, harassing, assaulting and injuring some in the process.

Mazi Kanu had pleaded ‘not guilty’ to the amended charges read before him. And trial Justice Nyako adjourned the matter to February 16th this year. He had entered his plea to the fresh amended charges against him which border on his alleged commission of acts of terrorism, felony, incitement, unlawful importation of a radio transmitter, and headship of an illegal organization among others.

Even behind bars, in solitary confinement precisely, the Buharideens still harbour acute hatred for Mazi Kanu in particular and the Biafrans in general. They hate our guts! The ‘fear’ of Kanu, for them, seems to be the beginning of wisdom. If Kanu is not being tortured psychologically then his visitors, including his lawyers and family members, must be searched down to the pants before being allowed to see him or interact with him.

Justice Nyako had ordered that she would not like to see Kanu appear before her again wearing the same Fendi designer clothes he had worn since his scandalous rendition from Nairobi. Yet the last time we saw him on video online appearing in court he was still decked in the same white Fendi! The DSS claimed they brought some set of clothes to him but he declined. And his lawyers said the new wears they procured for him were not delivered on time prior to the appearance.

President Muhammadu Buhari has effectively established a rule of the jungle instead of the rule of law in the ‘zoo’ republic of Nigeria. Or how else does one understand a situation where citizens attending a court case would be molested and beaten in the presence of state agents? Why would a rogue state pay agents of terror to terrorize decent folks outside the premises of a court?

READ ALSO: OPINION: What did PDP do to deserve the loyalty of Igbos?

Comrade Omoyele Sowore, the intrepid human rights’ activist and Publisher of SaharaReporters, appeared to be the main target of these hoodlums from the north. On three or four ocassions the irrepressible former UNILAG student union leader appeared at the court premises to try to gain entrance into the court room he had not only encountered stiff resistance from the hooded DSS agents but bandits armed with projectiles, knives and machetes working for the government would be unleashed on him.

The other day he had escaped in a jiffy as stones and other sharp objects were hauled towards his vehicle smashing the windshield. In all of these violent incidences none of the perpetrators had been arrested or prosecuted for violent conducts capable of causing a breach of the peace or inflicting bodily harm on a law-abiding citizen.

Comrade Sowore has always stood against oppression and injustice in our rotten society. And he has paid dearly for his uncompromising no-nonsense approach to the issues of misgovernance and elite corruption. Recently, the Buhari regime had withdrawn his ‘citizenship’ by de-registering his national identity and other vital national and international documents with which he did business.

For the past two years he had been confined to Abuja against his wish and will. The Federal Government, following the botched #RevolutionNow protest he had organized, had arrested him and prosecuted him. The persecution took another turn for the worse as a court of competent jurisdiction, through the instigation of the government, restricted his movement to the Federal Capital Territory alone!

The executive SaharaReporter has demonstrated faith in the struggle and strong belief in his convictions. In the course of fighting for our abused rights and dignity he had faced a lot of challenges, some life-threatening yet he has refused to be cowed. We salute his courage and patriotism!

Many Nigerians are agreed when some critics describe our country as a huge ‘zoo’! The rule of the jungle being presided over by the dementia-ravaged lanky man from Daura must not be allowed to continue unchallenged. Buhari and his Fulani gang must not be allowed to take Nigeria back to the Hobbesian state of nature where life is solitary, poor, nasty, brutish and short.

Comrade Sowore must not only regain his freedom in totality but attempts to strip him of his citizenship must be resisted and condemned by all and sundry. It cannot be a crime for one to expose official corruption and speak truth to power. It cannot be a criminal act for one to speak up against the broken system.

We refuse to bow and tremble before some uncircumcized primitive Fulani bigots and barbarians. Our dignity must be respected. No man is good enough, not even Buhari, to be the master of another! We have no master but the immortal Omnipotent Supreme Being.

OPINION… Too Young To Rule: Nigerian Youths and their flat-footedness

OPINION: What did PDP do to deserve the loyalty of Igbos?