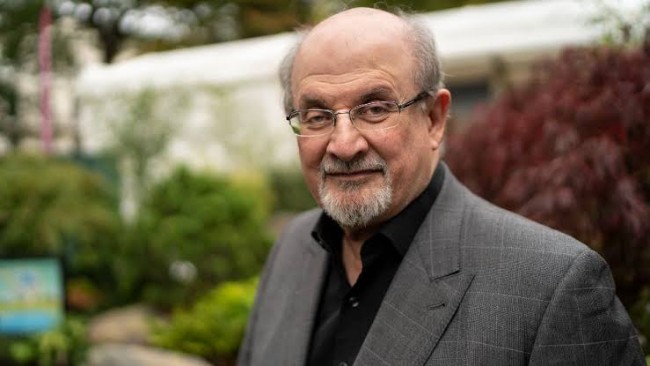 Salman Rushdie, the Indian-born British/American famous author, has grown gradually old attaining the ‘golden’ age of 75 lately. He was still in his early 40s when he wrote ‘The Satanic Verses’, a hugely controversial literary work, nay ‘bloody’ book, that threw him into international fame and limelight. Before authoring ‘The Satanic Verses’ considered widely as ‘blasphemous’ to the Islamic faith the great bespectacled academic had penned ‘Midnight Children’, his first book that sold millions of copies globally. An atheist the man had been described by many of his Islamic traducers as an ‘apostate’ who should not live but die!

Just a year after the publication of the ‘Satanic Verses’ the late Iranian Supreme Leader, Ayatollah Ruhollah Khomeini, had imposed a ‘fatwa’ on him, urging the Muslim faithfuls around the world to hunt down Rushdie and kill him for a bounty worth millions of Dollars! While Rushdie had survived the late revolutionary Mullah from Iran (having gone into hiding and under police protection in the UK) the repercussions of the fatwa and the book went beyond boundaries.

Riots and violent demonstrations took place in many cities and countries (including his native land of India where the book was first banned). Scores died and hundreds were wounded as the ‘Satanic Verses’ travelled far and wide reaching almost every nook and cranny of the entire universe. Translators did a wonderful job of reproducing the book in languages other than English. Some of the translators were gunned down and others survived assassination attempts!

Last weekend in the United States (somewhere in New York State) Salman Rushdie was about to address an advertised conference inside the Chautauqua Institution. And suddenly a 24-year old Hadi Matar ran towards him brutally attacking him with a knife! Before the assailant was forcefully pulled off him he had done extensive body damage to Salman by stabbing him multiple times in the neck, hands and abdomen!

The aggressor was tackled by the participants and he was subsequently arrested by the police. He had since been charged to court for attempted murder. Rushdie was airlifted to a hospital on a stretcher. And recent reports online had it that he was recuperating well from his serious injuries!

The mad boy who wanted to stab him to death risks the rest of his miserable fanatic life behind bars. Perhaps, Hadi was motivated to attack Rushdie to make name for himself. Or better still, to go to Iran and collect the millions of Dollars bounty upon his success in taking out permanently the ‘Satanic Verses’ author. But now he had failed fortunately in his deadly mission.

It is indeed inconceivable that a great man notorious for a highly-contested book he wrote decades ago could have attended a social event without robust arrangement made for adequate security. If Hadi Matar were armed with a pistol he would have finished off Rushdie by pulling the trigger before any help could come his way from anywhere.

Rushdie may survive this gruesome episode that reminded us of the price still dangling on his head on a platter. And in the future, therefore, precautionary measures ought to be put in place to forestall any recurrence. There are out there hundreds if not thousands of Hadi Matar waiting for a good opportunity to strike and deliver Rushdie to the grim reaper!

Iran constitutes a recurrent threat to global peace. Apart from sponsoring terrorism and trying hard amidst economic sanctions to produce nuclear weapons the notorious Islamic state represents a permanent danger for humanity. It runs neither a democracy nor a theocracy.

The Rushdie recent gory incident reminded us all about a certain religion steeped in historic bloodletting and intolerance. They preach peace, love and tolerance hypocritically but are always ready to break the laws, commit murder and arson. They see the rest of us as glorified infidels but they are not better than us in the righteous realm.

Back home in Nigeria some Muslim fanatics had continued to spill blood of the innocent at the least provocations. The late Gideon Akaluka and Miss Deborah Yakubu paid the supreme price. The former many years ago in Kano and the latter not too long ago in Sokoto.

Freedom of expression was frontally attacked when Salman was knifed on stage! Democracy which guarantees freedom of speech and rule of law must be protected from the whims and caprices of dictators from Moscow to Damascus, Tehran to Asmara, Abuja to Cairo.

Even if Rushdie had succumbed to death as a direct result of the aggression he suffered in America we must at all times defend freedom (including that of faith) from Lagos to London, Paris to Washington DC.

We express our heartfelt solidarity with the wounded author of the ‘Satanic Verses’. We wish him soonest recovery! And to those radically opposed to the dissemination of information and cross-fertilisation of ideas we say thumbs down. The train of liberty and civilisation had long left the station before their arrival.

Placing a bounty on the head of an author for expressing his views via a book is a demonstration of medieval madness. Though Rushdie had since apologised to the Muslim world for any ‘offense’ his book might have caused them it is ridiculous that the fatwa has lately been described by the Iranians as a “bulet which once fired never stops until it hits its target”.

The ultimate judgement whether the ‘Satanic Verses’ was (is) blasphemous or not belongs to the Supreme Being. Therefore, the Adamic elements must abide by this divine edict spanning generations found in both the Holy Bible and Holy Koran.

Related Topics:OPINIONSalman Rushdie
Up Next

OPINION: Nigeria’s next president faces a collapsing security situation: five things he can do