[OPINION] TB Joshua: A time to come and a time to leave! | Ripples Nigeria 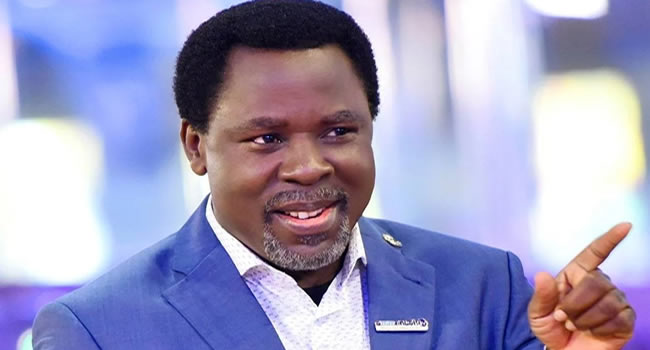 The Nigerian popular televangelist, Prophet Temitope Balogun Joshua, popularly known as TB Joshua, the founder of the Lagos-based Synagogue Church of All Nations (SCOAN) died over the weekend in Lagos. Prophet Joshua was said to have conducted an evening service in his church and was on his way to the hospital when he died. He was said to have fallen sick two days prior. His 58th birthday was billed for June 12. His megachurch runs the popular Emmanuel TV from Lagos and viewed worldwide. Prophet Joshua was born on June 12, 1963. He hailed from Arigidi Akoko, in Akoko North West Area of Ondo State. He was married and had three children.

According to the widow, Evelyn Joshua, however, the man of miracle had spent about three long hours on the ‘mountain’ praying before mounting the pulpit for the evening worship. Ministering the gospel to the faithful the Prophet spoke prophetically about a time to come and a time to leave. And suddenly he took his leave retreating to his inner chambers.

As the woman, according to her narrative, waited for some time for her husband to re-emerge to continue the service she decided to check on him. Lo and behold she met the famous Prophet sitting on the chair like someone reflecting but unconscious! Efforts to revive him proved abortive.

It would seem that Prophet Joshua had a premonition of the grim reaper lurking by the corner going by the trending video in which he had exhorted his members to mark his upcoming birthday by praying and fasting. He had these to say: “As things stand, you may have realised it will not be easy for me to celebrate my birthday under the present circumstances. Some of the people who want to come are troubled by the situation all over the world. We see their fear and their worry. I feel their pain; I feel their worry…. Therefore, let us dedicate this day to prayer and fasting. Don’t forget the needy. By the grace of God, more birthdays are ahead. God bless you!”

According to some online reports some soldiers and other security agents had laid siege to the Synagogue edifice as if something was wrong somewhere. They were said to have molested journalists, preventing people from getting inside the temple of God. Nigeria and her security elements never ceased to amaze the outside world with their unprofessional work ethics. Why preventing legitimate people from getting into Synagogue? Or was there a search warrant or fears of looting following Joshua’s sudden demise?

Prophet TB Joshua rose from a poor parental background to become a great man. He touched lives, he empowered lives. He was controversial yet an enigma. In a nation where pentecostalism has become a billion-dollar-spinning ‘business’ Joshua made name and money for himself building the Synagogue to become one of the greatest christian organizations in Nigeria and Africa. His followers cut across regions and countries.

Scenes of melancholy could be seen on video online as his followers mourned his untimely passage to the great beyond. Men and women, old and young, were seen shedding tears and asking questions over their welfare since their benevolent ‘breadwinner’ had died. Some were even imploring God to take their lives instead and bring back Joshua!

But regrettably the stunning biblical Lazarus miracle is no longer possible in our generation post-Jesus. No mortal can boast of possessing the power wielded by Jesus the Christ when he raised the dead and buried Lazarus, his friend, from the grave. So Joshua is gone for good, never to return in flesh and blood. To those weeping we ask them to take solace in his good deeds and generosity while he lived. His pentecostal legacy would definitely outlive him from generation to generation.

The general effusion of grief towards the late prophet demonstrated his popularity and the impact he had had on the society. Yet he never endeared himself to many people in Nigeria and outside our shores. At home he was banned from membership of the Pentecostal Fellowship of Nigeria (PFN). And from Kampala, Uganda came the news that the Pastor of the Christian Life Church, Jackson Senyonga, was celebrating Joshua’s death! He described him as the “biggest witch in Africa”!

Nigeria boasts of great flamboyant men of God — Bishops, Prophets, Apostles and Pastors — the Oyedepos, Okonkwos, Adeboyes, Kumuyis, Sulemans, Enenches, Oyakhilomes etc. But unlike most of these rich and material-conscious ‘servants’ of God Joshua was different in many ways. He was stupendously rich yet he lived a normal life devoid of bigmanism. He was munificient and philanthropic.

While his peers were busy buying limousines and private jets he was content living modestly. Though he possessed the financial resources to indulge in such luxurious lifestyle or fantasy he decided to be himself believing in the vanity of material possessions here on earth. Perhaps that was why he was hated by his pentecostal peers.

When he began his ministry flaks and fireworks followed almost immediately because of his unconventional methods and tactics. He started off as a man of God of questionable credibility and source of spiritual power. But he ended up convincing millions of Nigerians and non-Nigerians of his healing and deliverance powers.

Prophet Joshua courted controversy as he set his eyes on the bigger picture. He began rough and tough! His physical attribute, heavily-bearded and eagle-eyed, was not only intimidating but his manner of deliverance raised questions about his possible involvement in occultism or sorcery. Initially he was alleged to have been using alligator pepper and other traditional instruments to drive away demonic spirits. He did many miracles and predicted events of the future. Some of these predictions hit their marks while others fell by the way side.

In the Holy Book we, as Christians, are admonished against proclaiming or reaching judgement on anyone since the ultimate judgement belongs to the heavenly hosts. But we dare say here that Joshua had this myth about his personality and evangelism that was as perplexing as it was interrogatory. Doubts about his staying spiritual power and his modest academic profile persisted for years even as the membership of Synagogue multiplied.

Many years ago (precisely in 1996) the late Prophet was arrested for drug peddling in Lagos by the operatives of the National Drug Law Enforcement Agency and detained for two weeks. It later turned out to be false accusation as nothing incriminating was found on him or inside his churchor home.

On 12 September, 2014, a guesthouse collapsed in the SCOAN’s premises in Lagos killing at least 115 people! 84 of those that perished were South Africans. This tragedy led many into believing that a blood sacrifice could have been the cause of it all! It was not the first time a building under construction had collapsed in Lagos or elsewhere in Nigeria. But what made the Synagogue building collapse more controversial was the large number of foreign victims. Litigation followed and Prophet Joshua survived the storm.

Many Nigerians outside the Synagogue family may not have known that TB Joshua’s birthday is on June 12. A greater event unfolded on June 12 1993 and it must have overshadowed the late Prophet’s birthday. On that historic day of June, the 12th, democracy was gloriously born in Nigeria but was murdered by a military gang led by Generals Ibrahim Babangida and the late Sani Abacha.

Now that another June 12 is imminently upon us we must, given the Buharian slow but steady loading absolutism, return to the trenches to defend democracy in our country. Bashorun MKO Abiola could not have died in vain while trying to actualize ‘Hope-93’.

As for Prophet Temitope Balogun Joshua the parting word is instructive for us, the living: ‘A time to come and a time to leave’! That is the portion of every living carnivorous and omnivorous animal. From the cradle to the grave remains till eternity our existential reality. Prophet Joshua came, he saw and he conquered.

Fare thee well, Prophet. We grieve for you!

Related Topics:SCOANTB Joshua
Up Next

[OPINION] Buhari: One hell of an interview!

[OPINION] The real price of marriage in South Sudan