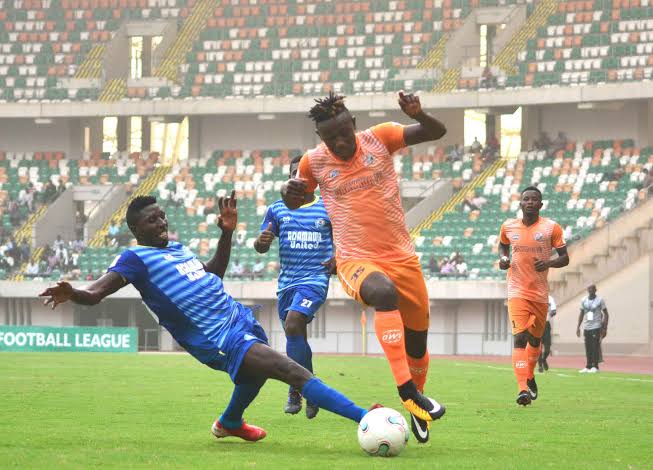 Soccer analysts and lovers of football in Nigeria were highly disappointed by the recent troucing of the home Super Eagles by 4-0 by the Mexican national team in an international friendly.

The home eagles, as the name implies are grown from the local league, mostly from the professional cadre. Assembling these Ayers from the home league was to respond to the long time clamour that Nigerian players who are playing their trades in the local league are not given opportunities to showcase their skills in the national team through international engagements.

But what an unfortunate way to prove the proponents of these side of argument wrong. They were not even humiliated with a lesser margin but a whopping an disastrous margin of four unreplied goals.

There are no good stadia to play in. At this juncture, one would spare some seconds to give aresounding kudos to Gov Okezie Ikpeazu of Abia State for beqeuthing an international class stadium to Enyimba International Football Club of Aba.

Most stadia across the country which srve as venues for professional league matches are nothing to write home about. The facilities are grossly dilapidated: manual score boards, leaking spectators stands, eroded pitches which are highly flooded after rainfalls and terminate football matches.

Players welfare in the local league is a wild dream. Players protests over unpaid allowances and remunerations have stalled league matches across the country. Clubs management fulfilling players sign on fees is a story for another. Then how do we expect our local football to grow and raise a befitting squad from the local content that can fit into international engagements?
On the other hand, most times it is a must win for the home team because the match officials are highly compromised and most times cannot do otherwise because no adequate security is provided for the match officials in match venues and they cannot officiate matches with the dictates of their conscience.

In a league where match officials are left at the mercies of the home team providing some logistics for the officials even some financial inducements are not spared, talking of an improved and healthy league would amount to a wild goose chase.

It is not far from the truth if one asserts that local league management is infested with corruption. Even those living in the Glasshouse, as the base of of the football governing body in country, Nigerian Football Federation, is known, are not afraid of throwing stones as they strictly warned not to throw stones because they live in a glass house. The implication is the glasses have in many occasions shattered to pieces. There have been litany of corrupt practices leveled against the house in the past.

Let us rewind to the 80s through early 90s where the likes of Leventis FC, ACB of Lagos, Abiola Babes,Stationery Stores of Lagos, New Nigerian Bank of Benin, Iwuanyanwu FC, Owerri, Eagle Cement of Port Harcourt, Dubic FC of Aba, Falcon FC of Aba were in vogue, Nigerian football league was then enjoying a bounty harvest.

Those clubs then owned by private individuals and corporate bodies produced the cream of Nigerian players that made our national team thick. Those are the likes of late Stephen Keshi, Henry Nwosu, Humphrey Edobor, Andrew Uwe, Bright Omokaro, Sunday Eboigbe, Sofa Shofoluwe, among others.
Can we recall that there was a time players from other nationalities plied their trades in Nigeria such as Edward Ansa and John Benson from Ghana, Iyala Iyala from Cameroun. The big question is why has our local football league gone this low that it does not receive a wider patronage from Nigerians? Ask a teenager the results of foreign leagues such the English Premier League, Spanish La Liga, German Bundesliga, Italian Serie A, who will tell you off hand. But ask him of the scores of two of the top flight clubsides in Nigeria, Rangers International Football Club of Enugu and Kano Pillars, he may not even know if the Nigerian league is in session.

The unfortunate thing is that those privately owned clubsides and those owned by corporate bodies that made the Nigerian league thick in the early 80s and 90s have either gone underground or acquired by state governments who ground them.

It will recalled that in 1983,84 star fixtures of the week in the Nigerian league were enjoyed live commentaries and the patronage was so high that fans of Rangers International from would pay their expenses to Calabar to watch their darling tie with Calabar Rovers.
Nigerian local football is badly hit such football events like the academicals where most football talents that held sway then were discovered, Youths Sports Federation of Nigeria (YSFON) and similar activities have either gone underground or not flying at full swing.

To address this menace requires critical intervention. Clubs ownership problems need to be urgently addressed. Private and corporate clubs ownership needs to be adequate addressed. Grassroots football activities and similar activities that made our local football thick should be reactivated less we continue losing our great and budding football talents in their flight overseas to seek greener pastures overseas. The corruption in football management in the country should also be adequately addressed.A stitch in time saves nine!

Related Topics:nigerian football league
Up Next