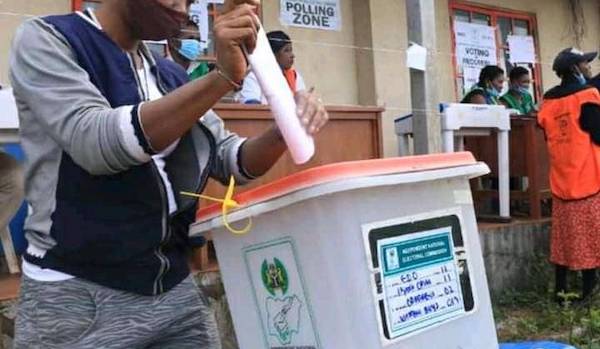 Like a ravaging epidemic, vote buying is rapidly becoming a momentary menace in Nigeria political space. Since the country returned to democracy in 1999, vote buying has steadily grown in scale and brazeness. It is now becoming a new normal for many Nigerian politicians to induce the electorate with materialistic items or benefits either in form of monetary cash, gifts or both. Schaffer (2007) sees voting buying as a situation in which small material goods, such as money, gifts or food are distributed to voters – by a political party or candidate- right before an election in the hopes of receiving their votes. This, undoubtedly, has perhaps empowered political moneybags to authoritatively decide who gets what, when, how and why during elections across all governmental levels. Apparently, in various elections which had been conducted in the past, electoral observers and media organisations had often reported numerous cases of by vote buying by political party agents at various polling stations across the country. The menace which has yet unabated, has remained a serious threat to our electoral system whose resultant effects bear enormous burden on our growing democracy.

Evidently, vote buying does not exist in isolation. As a world poverty capital with over 70 million population in living in abject penury, and with over 33.3 per cent of youths being unemployed, it is undeniable fact that high level of poverty rate, lack of trust in accountable leadership and desperation of politicians to grab political power are major factors behind this ugly development. These factors which have made the people to consider their fundamental right as a sellable item to political parties, have more or less portrayed the politics of our society as a game of cash and carry. Aside from being rampant at the grassroots, the epidemic virus of vote buying is also spreading at alarming rate among those we entrusted with public responsiblity. For instance, what many of us learnt during the national conventions and presidential primaries of some political parties where party’s delegates were bribed with foreign currencies in order to support a candidate or the other is nothing, but embarrassing. This glorious shame has made Nigerian politics seems as money politics where the highest bidders easily clinch electoral victory. Majorly, some of the implications of this ignoble act include, poor representation/ governance, violation of electoral principles, undermining the emergence of credible candidates and so on.

First things first, a poor representation is a governance without accountability, transparency and fairness. It is a governance which denies the citizens the dividends of democracy and also dashes away their hopes and expectations. Vote buying perhaps enables poor governance and undercuts the people ability to hold their elected leaders accountable especially when they fail to provide the basic needs of governance. Nigeria, for example, as a second in rank in the World Poverty Capital is gradually becoming a failed state. As a matter of fact, Oxford University and The London School of Economics has described the territory of as Nigeria as a fragile State, stating the prevalence and dominance of organised non- state violence, government’s weak capacity to provide essential functions, poor or unattractive environment for private investment, lack of trust between the government and the governed, among others as the symptoms the country is obviously displaying. This is, however, quite pitiful as Nigeria is one of the African territories cherished with enormous natural resources and plethora of productive manpower. Nigeria’s calamity has often been attributed to the leadership deficit persistently bewildering the country. More often, the high level of corruption and mismanagement of public treasury by public office holders have always resulted in retrogression of our society. Leadership is a critical factor in good governance. And when politicians can easily get the state power by luring the voters with gifts or money during elections, they can easily forsake their electoral promises after winning the election and leave the people to bear the brunt. Essentially, citizens must discourage vote buying during election period as no politician who sincerely mean well for the country and truly wants to serve the interest of the people would deem it compulsory to bribe the electorate with materialistic values in order to secure political office.

Moving on, one of the advantages of democracy, which is adjudged to be the best system of governance, is people’s participation and inclusion in governance. The citizens who are the major stakeholders in the politics of democratic rule, are fundamentally given the right to elect their representatives freely. And, this is done through election. The election process provides an avenue for the citizens to critically asses and scrutinise the eligible aspirants seeking to represent them either at the local level, state or federal level. However, this civil right has always been imperiled as some politicians believe in buying off the conscience of the citizens with money or other incentives in order to determine their choice during elections. This has chiefly tampered our electoral system as most of our leaders are no longer voted based on their ideology, credibility, capability, competence and their manifestos. On the contrary, officials of public offices are now mostly elected based on who has the financial muscle and can lavishly spend the money during electoral campaigns and can induce the votes with various items like clothes, foodstuff, among other items. As a result, it does obstruct our democratic processes, leading to rigging of election through monetisation. In other words, vote buying does not only undermine the credibility of an election, it also enables politicians to grab power through illegal means. By far, it perpetuates corruption throughout the entire political system as the elected candidates who bought votes before emerging may not stop using the strategy in other areas of governance. Therefore, as voters, we must restore our democratic process by shunning vote buying in its entirety to pave the way for responsible leadership.

Moreover, in sane climes where democratic rules are upheld, politics is a market place of ideas where ideological politicians share their wealth of experience and dexterity in tackling the lingering problems of the country to woo the electorate. However, in Nigeria, the desperation of the political class to be in power and maintain the status quo throughout their life has given a rise in vote buying. And this has given moneybags politicians the high chances to freely hijack the election process in their favour. They amass their wealth and influences to determine who gets what as and when due. Most times, in cases of typical ‘god fatherism’, the moneybags may jettison the competence of a candidate and pull support for candidate who will also obey them and please their interest. By implication, credible candidates who are financially disadvantaged and not supported by these influential individuals, may be forced to withdraw from the race or eventually lost the election. This can lead to the emergence of candidate who is grossly incompetent and highly corrupt as winner of the election. And since voting is the only power which the citizens have during election, the aftermath of the exercise gives political office holders effrontery to be non – accountable and unfair to the masses, especially when the citizens had negotiated their votes with instant gifts. In other words, vote buying discourages qualified candidates from running for office and it entrenches corrupt officials in their positions.

In conclusion, vote buying, a punishable offence under the existing laws in the constitution of the Federal Republic of Nigeria, is undoubtedly a threat to good governance, transparent electoral process and quality leadership. To eradicate the scourge, stringent punishment for parties involving in vote buying should be enacted and strictly be enforced before, during and after election. In addition, provision of employment for the youths, restoration of ideological based politics and reduction of poverty rate among the masses must be prioritised by the government. The electorate, too, must bear in mind that voting is their civil responsiblity which should not be substituted for money or whatsoever items for the sake of posterity.

Related Topics:VOTE BUYING
Up Next