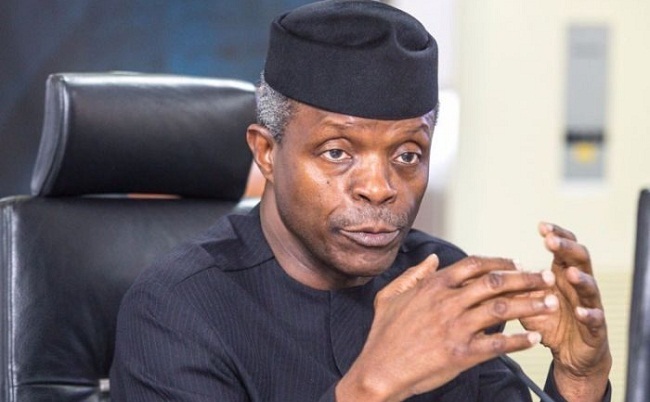 The Vice President of the Federal Republic of Nigeria, Prof. Yemi Osinbajo is a gentleman whose political and evangelical integrity is not in any serious doubt. He is not a paragon; therefore, like every mortal, he has his strenghts and weaknesses. (Saints hardly venture into politics, especially the Nigerian murky one). His strenght lies more in his rich ecclesiastical background as a Pastor prior to his baptism of fire in politics Nigeriana during the Asiwaju Bola Tinubu gubernatorial years in Lagos state. His weakness, however, could be linked to his involvement in the dramatic Buharism and the Buhari factor.

Working under an underwhelming President buffeted left right and centre by a myriad of socio-political and economic challenges could be said to be a hard task indeed. The Buhari factor has negatively impacted on the credibility and integrity of Osinbajo so much that there exists no room for an honourable exit. He has already been ‘damaged’ and the risk of sustaining more ‘damage’ is plausible.

The failure of President Buhari must be shared by Osinbajo even when his patriotism and dedication to duty has been acknowledged by not a few critics. It is one thing to be a patriot or decidated to one’s assigned duty yet another to defend the indefensible or present your principal whose mediocrity is a global phenomenon in bright colours hypocritically.

The Vice-President may have been a Pastor, a man of God imbued with biblical wisdom and intelligence but the Nigerian national politics has a way of bringing out the worst in every individual no matter how lofty your claims of religious piety. Osinbajo may have been transformed (wittingly or unwittingly) into a ‘monster’ in whom the heavenly hosts are no longer comfortable with.

Thus far no one has levelled any gross misconduct and insubordination allegations against VP Osinbajo even though critics attack him ceaselessly over his complacence if not connivance with the Fulani gang in power in their desperate efforts to ‘islamize’ or ‘fulanize’ the rest of us. His powers are limited by the constitution and as a lawyer Osinbajo is moving softly in order not to make the Aso Rock cabal livid.

Mustering enough courage to defend Buharism even when the nation is faced with unprecedented security challenges and economic meltdown defines the unflinching loyalty and allegiance of Osinbajo to the Buhari presidential locust years. Perhaps he is nursing the ambition to succeed the Daura lanky retired General but even if he habours such inordinate ambition Osinbajo would be shocked in the event of a presidential poll come 2023 to realise how deep the anger of Nigerians run over the broken system.

Recently in Ikoyi, a high-brow neighbourhood of Lagos along Gerrard Road, a 21-storey building nearing completion suddenly collapsed around 2pm last Monday killing scores of people and injuring some others. It was a tragedy too horrendous to be imagined! From the building’s structural components to the figures of corpses found inside the debris, the horrible incident had been plagued with controversies.

The collapsed edifice was billed to be an infrastructural masterpiece, the first of its kind in Nigeria in terms of sophistication and master plan. The proprietor of the fallen multi-storey building and the Managing Director of Fourscore Heights Limited, Femi Osibona (himself killed in the tragedy) had boasted of his professionalism and years of experience. Yet he stood accused of using sub-standard materials and cheap labour to execute the mega project!

According to the late Osibona in his exoticizing best element: “This development will give peace of mind and comfort to the residents, because everything works……We have exhibited our expertise in property development in the United Kingdom, South Africa, the United States of America and Nigeria”.

Reportedly the property comprising four-bedroom maisonettes, flats, duplex and penthouses was 65 percent sold out. The price range for the apartment was also said to be between $1.2 million and $5 million! The structure was said to be 80 percent completed and was billed to be concluded in 2022.

So far 40 corpses comprising 37 males and three females, had been recovered from the site. Over 50 persons, including Osibona, his personal assistant, Onyinye Enekwe, and friend, Wale Bob-Oseni, (who was billed to travel back to his US base) were trapped in the building and all pulled out of the rubble dead. Nine persons survived the tragedy!

Quoting numerous sources the popular online media outfit equally alleged that Osinbajo possessed other properties which he managed through fronts and siblings. Of course if that should be the case then the asset declaration upon which Osinbajo stood prior to their re-election into office for a second consecutive tenure could be subject to perjury.

Again controversy over the original approval plan had hit the social media. Was it approved to be a fifteen-storey building or a 21-storey structure? Ordinarily according to multiple credible sources it was officially approved as a 15-storey residential building but corruption had intervened to ‘increase’ it to 21!

However, in a statement signed by the Senior Special Assistant to the President on Media & Publicity, the Office of the Vice President, Laolu Akande, had vigorously debunked any insinuation linking his principal to the ownership of the fallen structure or any other building in Lagos for that matter. VP Osinbajo threatened to sue the publishers of the story.

Collapse of buildings is not a strange news in Nigeria. But in this particular gruesome incident in Lagos there is much more than meets the ordinary eye. Was the late Osibona fronting for a politician? If yes, then who? Who really owned the land and the luxury apartment building? How many storeys was approved for construction? If fifteen then why twenty one in the end?

These are the crucial questions the probe panel constituted by the Lagos State Government must answer satisfactorily. We are talking of loss of precious lives here (including those of poor artisans working there to eke out a living). So no stone should be left unturned to unravel the circumstances surrounding the tragedy in Ikoyi.

Governor Babajide Sanwo-Olu must make public the findings of the probe panel. The truth must be made to prevail in this tragic matter. No cover-ups, no manipulation, no politicking. Culprits must be established and responsibilities apportioned. Otherwise a future recurrence is not far from hitting us yet again.

May the souls of the poor workers and citizen Wale Bob-Oseni and Ms Onyinye Enekwe (billed to wed this December!) rest in perfect peace. We grieve for them all!

OPINION…Anambra Decides: Before we decide!