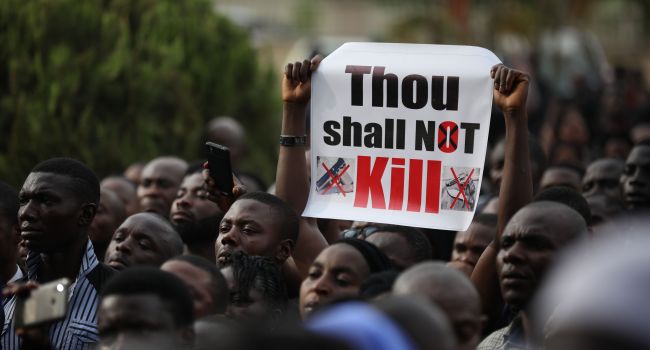 In early June 2022, 40 people died, including children, in a mass shooting and bomb attack on a Catholic church in the city of Owo, southwestern Nigeria.

The incident remains one of the most prominent terror attacks in the country. It drew global responses from the United Nations, the Pope, and various governments, including the US. Five American senators asked Antony Blinken, the US secretary of state, to re-designate Nigeria as a country of particular concern with respect to religious persecutions.

The senators argued that horrific violence had been committed against Nigerian Christians lately, including the massacre of churchgoers on Pentecost Sunday and the stoning of a Christian college student.

Sadly, such violence has become all too familiar for Christians in Nigeria. A series of high-profile incidents this year has drawn particular attention to the issue.

According to data collected by the Armed Conflict Location and Event Data Project, there have already been 34 separate attacks on church premises so far this year. In 2020 there were 19, and in 2021 there were 33. The data shows 1,664 persons have died in targeted attacks against churches, 390 persons sustained different forms of injuries, and 188 sanctuaries have been burnt or destroyed by terror arsonists since 2010.

Based on my previous work on the drivers of violence in Nigeria’s north central region, I can say that the sustained incidents of terror attack on the churches in Nigeria have not occurred in a vacuum.

In my view there are three main drivers: the rise of jihadism, long standing pastoral conflicts and related criminality.

The primary enabler of these mutually reinforcing factors is the general deterioration of security in the country.

Background to rise in attacks

Attacks on churches took a new turn in 2019 when the terrorists started kidnapping worshippers. In 2019, 500 Christians were kidnapped, among them 18 pastors.

Four pastors were killed and over 300 million Naira (U.S $730,000) ransom paid, according to the Christian Association of Nigeria.

The recent rise in incidents involving Christians should also be seen in the context of a general upturn in violence against all civilians – irrespective of their religious affiliation in Nigeria.

Boko Haram members prefer to be known by their Arabic name – Jama’atu Ahlis Sunna Lidda’awati Wal-Jihad – meaning “People Committed to the Propagation of the Prophet’s Teachings and Jihad.”

The group claims to be opposed to western civilisation (which includes western education) as well as the secularisation of Nigeria. For Boko Haram, targeting churches is driven by both opportunistic and ideological considerations which present Christians as infidels.

Other aggrieved groups such as armed Fulani herdsmen are mostly of Islamic religion. They are known to attack locals who are predominantly Christian farmers in parts of Benue, Kaduna, Nasarawa, Plateau and Taraba states in north central Nigeria.

The roots of these conflicts lie in climate-induced degradation of pasture and increasing violence in the country’s far north. These factors have forced herders southward where they have clashed with sedentary farmers over grazing reserves and blocked traditional migration routes.

One of the largest northern Christian denominations, the Fellowship of Churches of Christ in Nigeria describes the persistent attacks by herdsmen on Christian farmers as Fulani herdsmen terrorism.

The narrative of the herder/farmer conflict is common. But underneath it is the subterranean stream of a bitter religious battle, and the quest for domination.

Evidence on the attacks by Fulani herdsmen and growing extremism show that the group has emerged as one source of mayhem in Nigeria today, alongside notorious bandits.

Bandits subject Christians to perpetual fear by issuing threats. In December 2021, they issued a threat in Zamfara State, northwestern Nigeria, ordering the Christian community to stop worshipping and to close their churches.

And Kaduna State has emerged as the hotspot of banditry since 2015. Kidnapping in Christian communities remains on the rise.

Other fundamental factors that enable terror attacks on churches are recruitment into extremism groups and radicalisation. This happening against a backdrop of bulging youth unemployment and increasing number of out-of-school children.

UNICEF estimates there are 18.5 million out-of-school children in Nigeria. That is more than the combined population of Denmark, Finland and Norway.

These numbers suggest there is a pool of young people who can easily be recruted into terror groups.

The grip of economic hardship has also become a precursor for easy recruitment in remote villages in northwestern Nigeria. Here the Ansaru group that formed in 2012 as a breakaway Boko Haram faction after a disagreement between ‘moderates’ and ‘hardliners’ is luring young people to their movement.

The policy solutions to increasing terror attacks on churches are: heightened security awareness among churches; addressing radicalisation and extremism; and security sector reform.

The first line of action is for church authorities to conduct vulnerability assessments of their sanctuaries and locations. These would help small to medium sized places of worship develop plans to manage the risk of a terrorist attack, and make their worship centres safer.

In addition, assessments of the threats posed to large and regular festivals which attract millions of people need to be done. Prominent denominations like the Redeemed Christian Church of God, Winners Chapel, Deeper Christian Life Church regularly run such events.

Threat assessment would guide the development of security envelopes. These could include the installation of surveillance infrastructure, creating and arming security watch groups and establishing security checkpoints around entrance points.

In addition, church goers themselves need to be encouraged to be vigilant, and part of making worship centres safer.

But addressing terror attacks against the church cannot be treated independent of the call for broader security sector reform in Nigeria. Policing remains critical in rolling back the incidents of terror attacks as well as wider insecurity.

To strengthen policing capability, the government must amend section 214 of the 1999 constitution which centralises policing power within the federal government. Decentralised policing can create a community-focused approach that affords the opportunity to give inputs – operationally and in terms of human resources.

In addition, the federal government must collaborate with state governments to address the immediate challenge of Nigeria’s porous borders. Concerted efforts to recruit, train, and post adequately equipped security personnel to the borders can boost surveillance and stem the tide of the free flow of arms into the country. Terrorist groups rely on these arms to carry out attacks.

Finally, the socio-economic problems that allow terror activities to fester must be tackled. Even if policing is ramped up, terrorism will continue unless poverty, social inequality, and gross failure of governance are tackled.

Related Topics:churchesNigeriaterrorist attacks
Up Next

OPINION: Nigeria’s next president faces a collapsing security situation: five things he can do