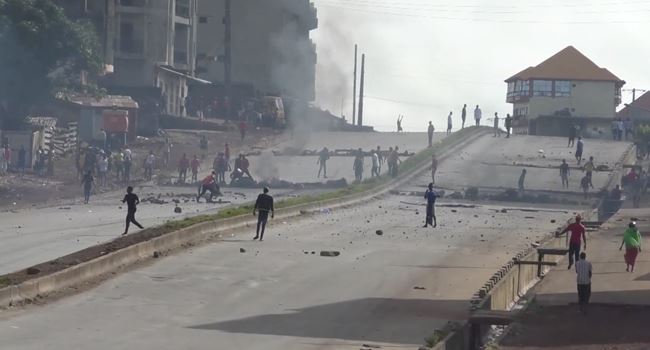 Opposition members in the West African country of Guinea have called for a second day of protest amid a crackdown on anti-government demonstrators.

At least four people were killed – one of them a gendarme – in clashes on Tuesday as outraged protesters rallied against a potential revision to Guinea’s constitution that would allow President Alpha Condé to seek a third term in office.

Reports say live ammunition and tear gas were reportedly fired in clashes between demonstrators and security forces in the capital of Conakry with violent protests recorded in the cities of Labé, Mamou and Kindia.

Rights group say several civil society leaders have also been arrested and according to the BBC, the homes of the two main opposition politicians – Sydia Touré and former Prime Minister Cellou Diallo – are currently surrounded by police and gendarmes with lorries.

Many shops, schools and businesses have shut and roads are mostly empty over the tense atmosphere in the capital of Conakry.