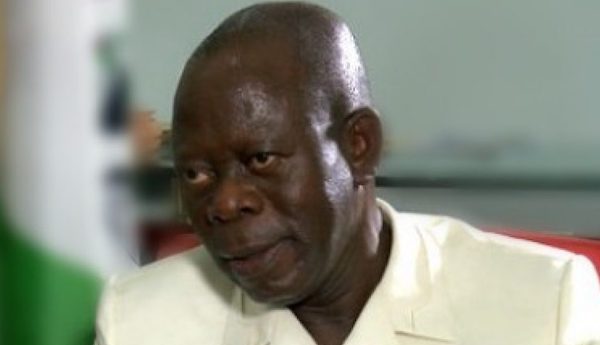 The National Chairman of the All Progressives Congress (APC), Adams Oshiomhole, Friday warned state governors against slashing workers’ salaries over the outbreak of COVID-19 in the country.

In his Workers’ Day message, the APC chairman appealed to governors to “be sensitive to the poor condition of workers during this difficult time.”

He noted that cutting workers’ salaries “can only bring about a vicious cycle of poverty.”

Oshiomhole advised the governors to rather reduce the cost of governance instead of slashing wages or retrenching workers.

He said: “For instance, cutting wages is most unhelpful in the circumstance. It’s like asking an anaemic patient to donate blood to save the lives of other patients in need of blood transfusion.

“A doctor who does that should have his license withdrawn. So, a policy adviser who recommends wage cut is abysmally unconscious of the mood of the present which is that compassion and solidarity.

“State governments should not make workers bear a disproportionate part of the burden. When you cut a workers’ poor wage, you are further limiting his power to be an economic player.

“How can the worker make effective demand for the goods and services produced when you shrink his income?”