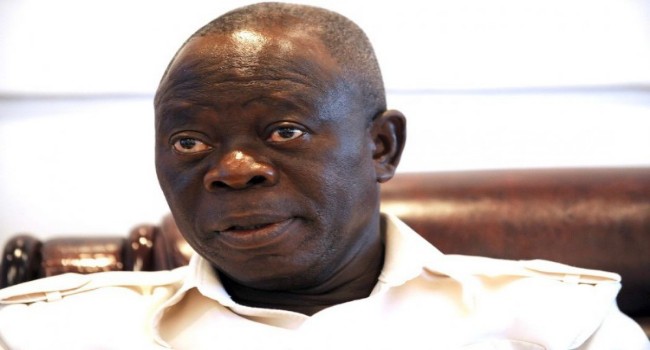 The All Progressives Congress (APC) National Chairman, Adams Oshiomhole, on Tuesday pleaded with a Federal High Court in Abuja to dismiss the suit that wants the Economic and Financial Crimes Commission (EFCC) to probe him.

Bishop Osadolor Ochei had in a suit marked, FHC /ABJ / CS / 628 / 2018 and filed before the Federal High Court in Abuja, prayed for an order of mandamus to compel the EFCC to arrest and commence criminal proceedings against Oshiomhole over alleged financial fraud while he was governor of Edo State.

The plaintiff attached to his suit 86 exhibits.

The plaintiff filed the suit after the EFCC failed to attend to his October 28, 2016, petition, where he asked the anti-graft agency to investigate some corruption allegations against Oshiomhole as governor of Edo State.

Counsel to Ochei, West Idahosa, had told the court that there were documents and electronic pictures of palatial houses credited to the former governor, whose earnings throughout his lifetime, according to the plaintiff, could not have been able to afford such.

He said among other allegations, that there was evidence of diversion of Edo State funds by Oshiomhole and that there were vouchers of exorbitant air fares that the former governor allegedly incurred.

But the former governor, via a notice of preliminary objection filed before the court through his lawyer, Damien Dodo (SAN ), contended that the plaintiff lacked the locus standi to institute the legal action.

He specifically begged the court to strike out the plaintiff’s first prayer for being premature and incompetent.

The governor hinged his notice of preliminary objection on 10 grounds, arguing among other things that the applicant, having failed to file the suit for judicial review within three months of occurrence of the subject of the suit, the suit had become academic.

He added that the action or inaction of the EFCC being subjected to review by the proceedings occurred on December 13, 2016, while the plaintiff only instituted the action for judicial review on June 13 0, 2018.

He noted that this came about 18 months after the occurrence of the alleged failure being complained about.

Further contending that the plaintiff’s right of action had become unenforceable, Oshiomhole said Ochei had not disclosed that he had legal right to file and maintain the action for judicial review, “having not shown how the actions of the second respondent/applicant affected him over and above other residents and indigenes of Edo State.”

He added that the court lacked the jurisdiction to entertain the suit for failure of the plaintiff to commence the action within the time provided by extant rules of the court and for failure to disclose locus standi to file the action.

Justice Chikere, after hearing the argument adjourned the matter till November 19 for hearing of the preliminary objection.