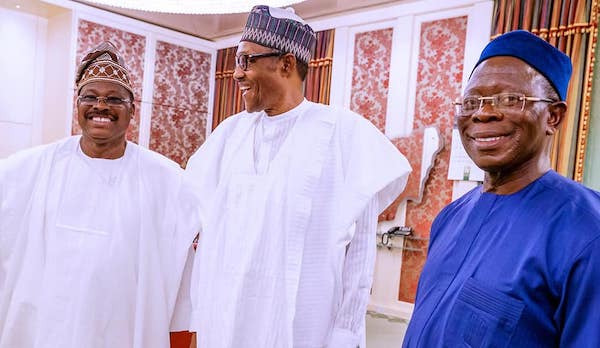 The Ekiti State chapter of the party had rejected the nomination of the ex-Oyo State governor and recommended two other persons for the position.

Oshiomhole told State House correspondents that he used the opportunity to commend President Buhari for slashing the pump price of petrol from N145 to N125 per litre following the drop in crude oil price.

He said the President’s action was unprecedented, adding that the crash in crude oil price in the international market has become a blessing to Nigerians.

He said: “I came essentially to present the former governor of Oyo State, Abiola Ajimobi, whom the South West has nominated to fill the vacant position of Deputy National Chairman, South, created by the appointment of the Minister of Industry, Trade and Investment.

“Of course, Mr. President already knows him, he hosted us a couple of times when he was governor of Oyo State and played a pioneering role in the formation of the All Progressives Congress (APC).

“Obviously, he is not a stranger to the President, it’s just a way of formality that I have to present him. Mr. President was delighted that someone with his background – a complete gentleman, he has been in the oil industry, a senator and a two-term governor, has been nominated for this position.

“So he will bring on board a wealth of experience that will help to reinforce the quality of leadership of the All Progressives Congress.

“But I also appreciate the fact that a couple of decisions the President has taken this week that in my view are profound but I don’t think they have attracted the kind of commendations.