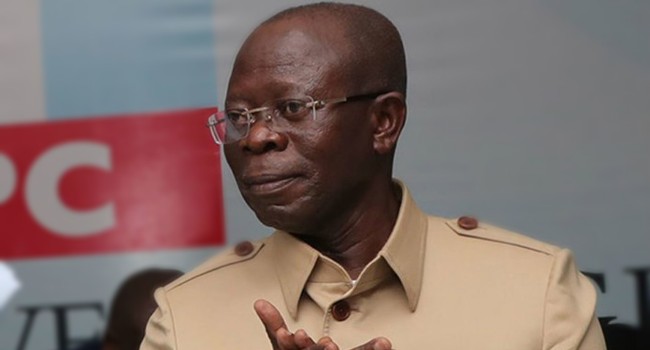 The All Progressives Congress (APC) national chairman, Adams Oshiomhole has bemoaned the situation of the party in Rivers State.

Owing to internal wrangling in Rivers APC, the party was barred from fielding candidates for any elective position in the state during the last election.

Blaming the in-fighting among members of the party in the state for the situation, Oshiomhole lamented that “as things stand today in Rivers, we don’t even have a local government councillor.”

He stated this on Monday when he spoke at the inauguration of a five-man caretaker committee led by Isaac Abott Ogbobula.

The committee has the mandate to reconcile aggrieved members of the party in the state ahead of the party congresses.

He said, “We don’t have a formal party structure despite our overwhelming support base. This move is consequent on the Supreme Court judgment on Rivers.

“We can’t build the party from outside and the National Working Committee decided to put a caretaker committee in place that will liaise with those that will come and conduct congresses from ward to state.

“My role is to simply inaugurate a committee to give it legal backing. The APC is divided in Rivers State and your first task is to reconcile the divides.

“We shall also send a high-level team to forge reconciliation ahead of the congress. We are not going to be indifferent to the situation in Rivers since politics is about the people.

“Our members have paid a huge price in Rivers and you all know the cost of fighting to finish. As things stand today in Rivers, we don’t even have a local government councillor. That can’t be the wish of the people of Rivers State and we know the actors but we don’t want to go into details.

“I hope the few setbacks we suffered is the lesson we need not to toe the path of crisis. You must put the party first. Yes, as human beings we have feelings but what matters is our capacity to put the interest of APC members in Rivers State into account, so that the people coming to do the congresses will have a reliable local base.

“You have the challenging task of managing the various shades of opinions in Rivers. We are the net losers in Rivers but we hope you can subordinate your interest to the larger interest of our party.

“Our doors are open, we are ready to listen to advice and, we shall do all we need to do to make the congresses successful,” Oshiomhole said.