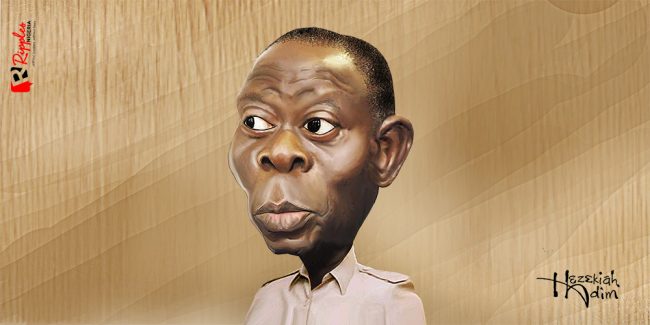 The national chairman of the All Progressives Congress (APC), Adams Oshiomhole, on Saturday taunted Senator Dino Melaye over his defeat by Senator Smart Adeyemi.

He said that the broom, which is the symbol of the APC, with the final defeat of Melaye had swept off the entire 16 senators who rebelled against the ruling party before the 2019 general elections.

Melaye was among 16 senators, who along with the Senate president, Bukola Saraki dumped the APC for the PDP and other political parties.

The defeat of Melaye by Adeyemi, after the supplementary election in Kogi West on Saturday (yesterday), meant that none of those senators who left the APC was able to return to the Senate.

Responding to the results of the election in a statement on Saturday, Oshiomhole said, “I have always believed in the ability of the people of Kogi West to elect leaders who will make them proud in the Senate and not the defeated Senator Melaye who is among the 16 Senators who rebelled against our party.

“As it stands today, the broom has swept away the entire 16 Senators, Dino being the last, who tried to destabilise our democracy for their personal interest, jettisoning the interest of the electorate.”

He meanwhile, congratulated Adeyemi over his victory as Kogi West senator-elect.

“On behalf of our great party the APC, I congratulate my brother and friend, Senator Smart Adeyemi, once again and we look forward toward working with you in this resolve by our dear President Muhammadu Buhari to take the nation to the ‘Next level’,” Oshiomhole said.