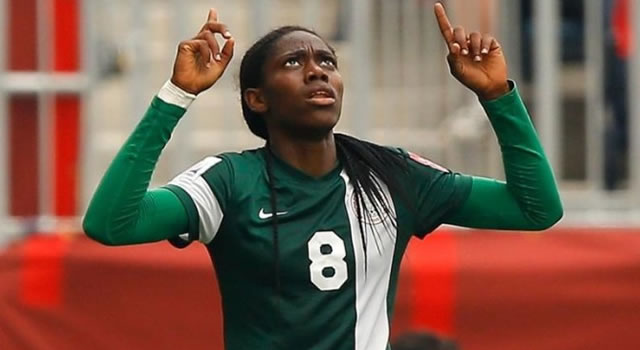 Super Falcons star, Asisat Oshoala has commended the efforts of the Nigeria Football Federation (NFF) in organizing an international friendly for the team against France, but is asking for more.

Nigeria’s women team will be taking on their French counterparts on April 4th in Paris – an encounter that will serve as Super Falcons’ first game since winning the Women’s Africa Cup of Nations in 2016.

Oshoala, who recently became a three-time African Women’s Footballer of the Year, says Nigeria need more of such games ahead of the qualifiers for the 2018 Nations Cup in Ghana.

“It’s a good one, a big step for us and good news for women’s football in Nigeria generally but it’s not enough,” Oshoala told BBC Sport.

“It’s not about the France game alone, we need more games like this and we don’t have to plead before we get games,” she added.

This year’s Women’s Nations Cup will also decide the continent’s teams for the 2019 Women’s World Cup, but eight-time Champions Nigeria are still in search of a coach.

But Oshoala revealed that she had had “an honest conversation with the president of the NFF (Amaju Pinnick) about this” and that Pinnick has been “very positive”, assuring that in a couple of weeks, there will be someone to lead the team.”

Super Falcons will be gunning for their eighth record appearance at the FIFA Women’s World Cup, as they remain the only African team to have played in all editions of the tournament since 1991.