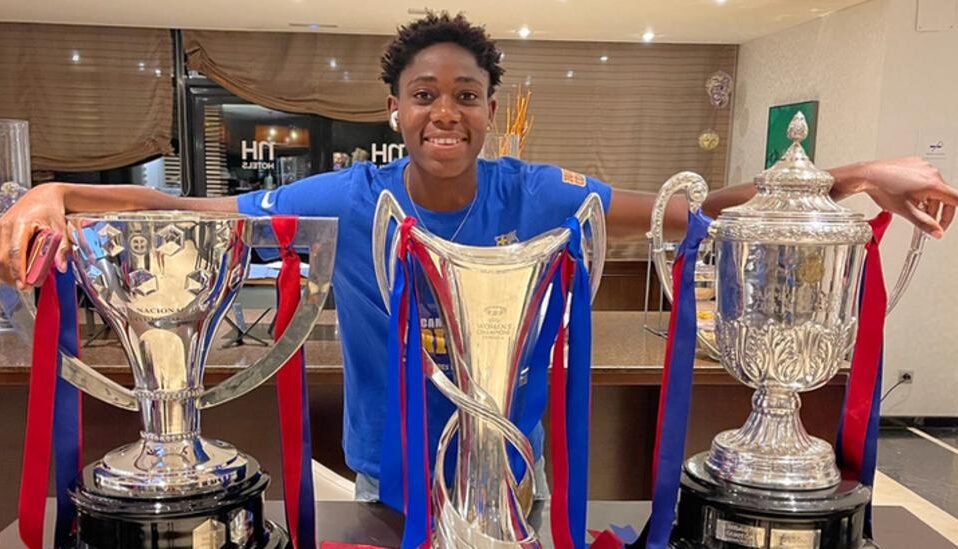 Super Falcons forward Asisat Oshoala has praised herBarcelona teammates following her clinching of the Pichichi award, saying it was a team effort.

The Pichichi award is the prize given to the top scorer in the Spanish Iberdola – the women’s topflight.

Oshoala, who was missing in action for about two months as a result of an injury layoff, scored 20 goals in 19 league appearances for the Blaugurana.

The reigning African women’s player of the year shared the award with Madrid striker Geyse Ferreira, who played 27 games for her club.

“It’s obviously been a team effort to get here, and l can only thank my team-mates and everyone at the club for this achievement,” Oshoala told the BBC.

“We’ve been working hard all season and cannot stop now because we have another big one ahead of us.”

Barcelona Ladies have one more big game to execute before the season runs out. They will be facing French club Olympic Lyon in the final of the UEFA Women’s Champions League in Turin this Saturday.

The club stand a chance of adding yet another trophy to their haul this season, and Oshoala said they were battle ready for the task ahead.

“The focus of everyone has shifted from a league title celebration to preparing for a massive game in Turin,” she added.

Oshoala linked up with Barcelona from Chinese outfit Dalian Quanjian on loan in January 2019. The move was made permanent five months later.

Oshoala, whose contract is until the end of the 2023-24 campaign, has scored 81 goals in 104 appearances for Barcelona Ladies.

Arsenal on verge of missing Champions League after Newcastle defeat