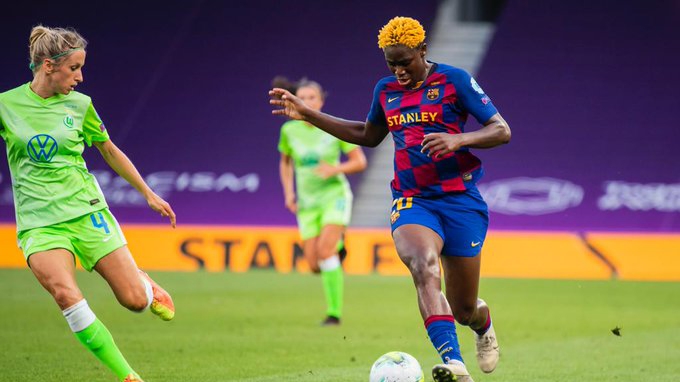 Super Falcons forward, Asisat Oshoala fired blanks as Barcelona Ladies fell to a defeat against Wolfsburg in the Champions League.

The Spanish giants, who were runners-up last season, have now crashed out of the competition following the 1-0 defeat in the semi-final encounter.

Oshoala was on from the start of the game but was substituted in the 65th minute for Aitana Bonmati.

Barca had 16 chances during the game but it was Wolfsburg, who demolished Glasgow City 9-1 in the quarter-finals, that advanced.

The only goal of the game was scored by Fridolina Rolfo in the 58th minute, which was enough to take Wolfsburg through to their fifth Women’s Champions League final.

The German side will now face Paris St-Germain or Lyon in Sunday’s final.

The two French sides meet each other in the second semi-final in Bilbao on Wednesday.