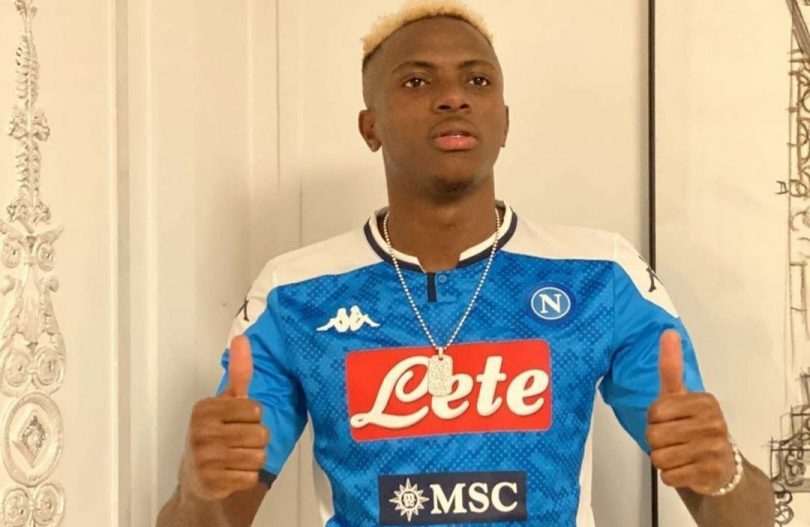 The transfer was officially announced on Friday, with Napoli President, Aurelio De Laurentiis, disclosing that the player cost about 80million euros and would earn about 4.5million euros annually.

Following the deal, Osimhen becomes the joint most expensive African player of all time.

“The next chapter is a very exciting one and I can’t wait to get on the pitch with the team, I want to thank the fans through the last few weeks,and I will definitely give my all on pitch for the common good of the club,” tweeted the 21-year-old on Friday evening.

Recall that Osimhen burst into the spotlight at the 2015 Under-17 World Cup in Chile, as he clinched the Golden Boot and Silver Ball awards while steering the Golden Eaglets to the title.

Reactions are trailing the record-breaking move, which equals the deal reached between Arsenal and Lille for Ivory Coast’s Nicolas Pepe in 2019.

The youngster claimed the best player of the season award in his first season at Lille after scoring 18 goals in all competitions, helping Lille finish fourth in Ligue 1.

“We’d like to extend our heartfelt thanks to Victor and wish this Super Eagle 🇳🇬 the very best of luck in his new adventure with Napoli. Get ready, SerieA. Thanks for the memories, Victor,” the French side tweeted.

“Osimhen is young and has huge potential, but also different characteristics to the other forwards that we already have in the squad. With him, our attack is complete,” said Napoli director Cristiano Giuntoli.

There have been other reactions from prominent Nigerians, and fans and stakeholders of the sport:

Congrats @victorosimhen9 on your new contract. This is a great leap for Nigerian football. Wishing you the very best at @en_sscnapoli. So happy for you, boy. More grace. pic.twitter.com/qwGO5cubSo

👏 All the best in this next chapter of your career, Victor! pic.twitter.com/TCOqOJm2U8

I celebrate today Victor Osimhen, Nigerian Professional footballer for the height he has attained. His recent exploits and signing signposts the boundless natural talents and brilliance of our youth if given the opportunity to showcase. Victor, a true Nigerian brand !