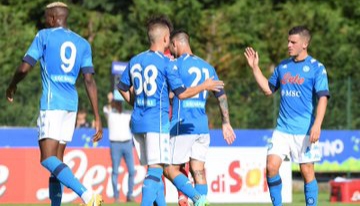 The Nigeria international, who joined the Italian Serie A side last season, is set for a second season with expectations high over his scoring abilities.

Osimhen, who was replaced at half-time in the game, netted all his gour goals in the opening half against the local side in a 12-0 thrashing.

Read Also: Osimhen gets new manager as Spalletti takes over at Napoli

Elfis Elmas, Kosta Manolas were other goalscorers in the first half for the Luciano Spalletti side.

Napoli will intensify their preparations for the 2021-22 Serie A campaign with friendly fixtures against Serie C club Pro Vercelli and Bundesliga champions Bayern Munich on July 24 and 31 respectively.

They will begin their new season with a date against Venezia at the Stadio Diego Armando Maradona on August 21.