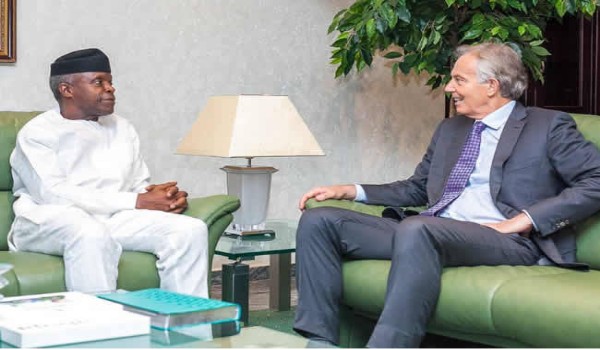 Blair led a delegation from the Tony Blair Institute for Global Change to the Presidential Villa in Abuja.

The details of the meeting remain sketchy as no interview was granted after the duo emerged from the meeting, neither has an official statement been made available.

The said meeting lasted over 30 minutes.

However, a tweet from the government revealed that the institute, as well as the Bill and Melinda Gates Foundation, would be supporting the Delivery Unit in the Presidency regarding some critical sectors of the nation’s economy.

The former PM last visited Nigeria in 2017, when he met with Kaduna State Governor, Nasir El-Rufai, and pledged to support state governments in Nigeria to deliver good governance to the people.

Osinbajo received Blair in the absence of President Muhammadu Buhari, who is currently attending an economic summit in Jordan.