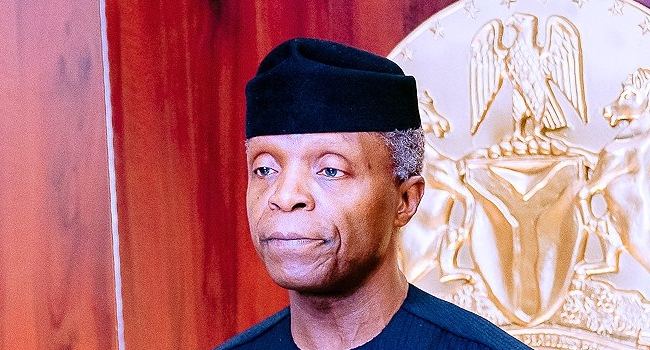 Vice-President Yemi Osinbajo on Monday urged the United States of America to halt the global moves and ambitions of some countries to dump fossil fuel.

Osinbajo made the remark in a speech delivered virtually at the 2021 Johns Hopkins University’s African Studies Programme Conference on the theme “Africa-US Re-engagement: A new foreign policy agenda.”

Represented by his Senior Special Assistant on Media and Publicity, Laolu Akande, the appeal of the Vice President centred on how the U.S., as a sovereign nation, can modify its foreign policy agenda with the African continent in order to lead Africa into prosperity.

According to Osinbajo, it’s high time the U.S. joined forces with Africa to collectively resolve the challenge of climate change.

He said: “The United States and Africa should work together to tackle climate change and moderate global warming including through an energy transition from fossil fuels to renewable energies.

For decades now, scientists and world leaders have been more concerned about the harmful effects of climate change that has consistently grown through the years, disrupting socio-political activities and making Earth mostly unsafe.

Osinbajo noted that Africa, as an entity, has, on its part, taken steps towards the actualization of a more friendly climatic condition with its recent signing of the Paris Climate Change Agreement.

“African countries have made commitments in this regard towards implementing the Paris Climate Change Agreement targets,” the Vice President stated.

Speaking further, Osinbajo acknowledged how top financial institutions have in the past contributed to the fight to resolve the challenge.

However, he resented their decision to pull the plug at a crucial time, which according to him include the European Union, the United Kingdom of Great Britain and Northern Ireland, and the United States.

“Given the long-term commitment to net-zero emissions by 2050, there is a growing trend among development finance institutions to withdraw from fossil fuel investment, including the World Bank’s decision to cease funding for upstream oil and gas development and the new restrictions on financing downstream gas development currently being considered by the European Union, the United Kingdom of Great Britain and Northern Ireland, and the United States.”

Osinbajo, in his speech, hereby, urged the U.S. to intervene, describing the development as an unfair trend.

He said: “While well-intentioned, this move does not take into account the principles of common but differentiated responsibility and leaving no one behind, that are enshrined into global treaties around sustainable development and climate action.

“The United States must lend its weight to stopping this manifestly unfair trend that can undermine the sense of collective responsibility we all have towards mitigating climate change. What is required is a just transition to zero emissions.”