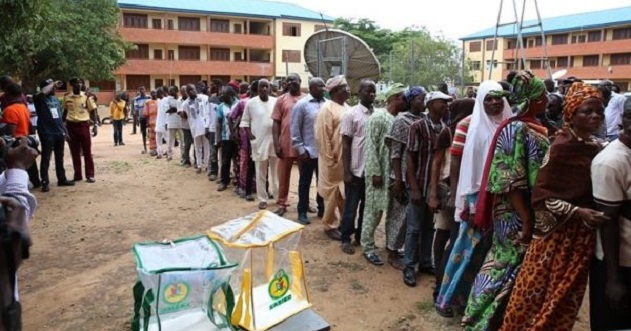 It was a precursor when Portable, a street pop artiste, told fans to vote the current Osun State Governor, Ademola Adeleke, who is the governorship candidate of the ruling All Progressives Congress (APC) against Ademola Adeleke of the opposition Peoples Democratic Party (PDP).

Adeleke, coincidentally, is the uncle of superstar artiste, Davido, who unfollowed Portable over what he felt was a perceived “disloyalty” which set the tone for what might be the most gladiatorial election in Nigeria’s recent history.

Meanwhile, Bishop of the Catholic Diocese of Sokoto and Convener of National Peace Committee (NPC) Matthew Hassan Kukah had decried the indifference of the electorate towards participating in the exercise.

Kukah made this call on Wednesday in Osogbo, Osun State, during the signing of a peace accord by political parties and candidates ahead of Saturday’s governorship election in the state.

According to the cleric, suffering and frustration inflicted on ordinary Nigerians by the political class was the main cause of the widespread apathy towards exercising their franchises.

He bemoaned the excessive monetization, which includes the costly sale of nomination forms, converting Nigeria’s democracy into one in which only the wealthy participate.

The APC presidential candidate, Bola Tinubu, on Tuesday mocked the PDP and Labour Party ahead of the Osun State governorship election.

Tinubu, who addressed a mammoth crowd of APC supporters at a campaign rally in Osogbo, described the PDP and Labour Party as mushroom parties that would labour till death.

Tinubu in his address ruled out PDP and LP chances in the election, and urged residents of the state to consider their future and vote for APC.

He said: “I ask you to please do the same thing you did in Ekiti. Come out with your PVCs and vote massively for APC.

“The voting is now in your hand. Be very vigilant. Be watchful. You will not do it in vain.

“Think about your children and vote accordingly so you can see the future. Come out en masse. Don’t mind PDP and other mushroom parties — parties like Labour; they will labour till they die. God will not make you labourers.”

In his response to Tinubu’s mockery, during a rally organised by the LP in Osun on Wednesday, Obi said the APC presidential candidate spoke ill of his party out of hatred, adding that the Labour Party will respond with love.

Read also: FOR THE RECORD: Osun 2022 governorship candidates and their promises

“I listened to our national chairman when he said that somebody said that they can labour till death. When they talk like that, when they show you hatred, Labour Party will show them, love. There is dignity in labour,” he said.

As tensions run high in the run-up to the elections, unknown gunmen on Monday attacked the residence of the Labour Party governorship candidate in Osun State, Lasun Yusuf.

The former Deputy Speaker of the House of Representatives told journalists that the gunmen attacked his residence at about 1:00 a.m.

Yusuf said: “At about 1:00 a.m., my house was attacked; the evidence is very prominent, my building is riddled with bullets.

“In the last three governorship debates we have had, I have never attacked anybody on how to govern Osun.

“Unfortunately, this attack, to my surprise, lasted for about 20 minutes. We have evidence of those that actually carried out the attack.

Osun Govt To Lasun: Don’t Use Attack As Alibi

However, the Chief Press Secretary to the Governor, Ismail Omipidan, called on the security agencies to investigate the attack and unmask the perpetrators.

He said, “On behalf of the state government, we are calling on the security operatives to please kindly investigate the allegation by Hon. Lasun Yusuff because I am tempted to believe that he is planning to unleash violence on the innocent people of Irepodun Local Government on the day of election.

“He is therefore using this as an alibi to prepare the ground for what he wants to do because if we were to be what he’s trying to paint us to be, I am sure that you will agree with me that we probably would have been after the PDP because it is that party that has been attacking our supporters.”

The PDP on Monday accused the APC of harassing its members with police in Osun State.

In a statement issued by the Chairman of its Caretaker Committee in the state, Dr. Akindele Adekunle, the party listed some members in Ijebu-IJesa and Eti Oni in Oriade and Atakumosa East Local Government Areas of the state as victims of the APC harassment.

The statement read in part, “Reports reaching the state secretariat of our great party, the PDP, indicate that a serving Commissioner in the government of Alhaji Gboyega Oyetola has been taking police operatives to private homes of PDP members in some local governments in the state to forcefully arrest them without any just cause.”

The Osun State government, however, described as false and unsubstantiated the opposition party’s allegation of collusion with the police to arrest its members in the state.

The Chief Press Secretary to the governor, Ismail Omipidan, who reacted to the development in a statement in Osogbo, accused the PDP of “creating ludicrous hypotheses” to win over the Osun people.

He added that the PDP was complaining because the police thwarted its scheme to buy PVCs.

Within the APC, there seemed to be a disunity due to the lawsuit filed by a chieftain of the party in the state, Moshood Adeoti, seeking Governor Oyetola’s disqualification from the elections.

The Federal High Court sitting in Abuja, on Thursday, declined to disqualify Oyetola, from participating in the Saturday governorship election in the state on the platform of the ruling APC.

The presiding judge, Justice Inyang Ekwo who delivered the verdict in a suit filed by Adeoti, said the plaintiff failed to establish a reasonable cause of action to warrant Oyetola’s disqualification from the election.

Adeoti had filed the suit seeking the court to invalidate Oyetola’s nomination as flag-bearer of the APC for the election, but in his judgement, Ekwo said the suit lacked merit and deserved to be dismissed.

As the various grudges and accusations persist, it is hoped that the voters would still come out to make their choice of whom would govern them and pilot the state’s affairs for the next four years.

Related Topics:#featuredAPCelectionOSUN 2022PDP
Up Next