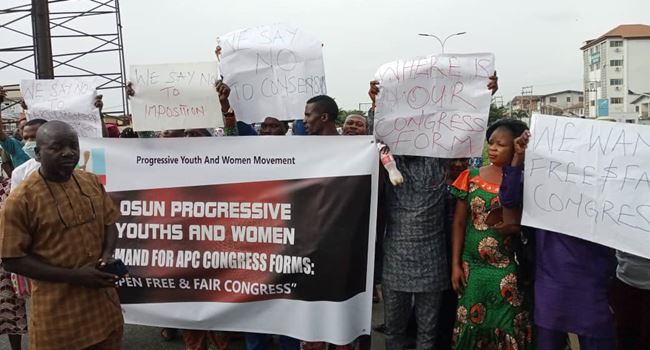 Youths of the All Progressives Congress (APC) under the aegis of Progressive Youth Movement (PYM) in Osun State have staged a peaceful protest over the alleged hijack of congress nomination forms in the state.

The youths, who staged a protest on the Gbongan-Ibadan road, Ogo-Oluwa, Osogbo, on Friday, accused the Osun State governor Isiaka Oyetola and the party chairman in the state Gboyega Famodun of hijacking the nomination forms brought by the national officials of the party.

According to the group, the national officials who came to Osogbo last Saturday were camped at a hotel under security surveillance and were barred from relating with any other members of the party in the state.

The youths called on the Governor Mai Mala Buni-led Caretaker/Extraordinary Convention Planning Committee (CECPC) to intervene in the matter and ensure that there is free and fair ward congress in the state.

The group, Led by Mr Rasheed Raji, claimed: “We are here to protest the electoral fraud being committed by Governor Adegboyega Oyetola and the APC Chairman, Prince Gboyega Famodun. The two leaders of the party are clearly killing APC in the State of Osun.

“Our party at the national level sent committee members led by one Abdullahi down to Osun since last week Saturday to begin sales of form and preparation for the congress. But ever since they arrived, the committee members are nowhere to be found. They are not either at the State Party Secretariat or any other place carrying out their national duty.

“Thousands of our members have paid for the nomination forms to participate in the ward congress but were not given form. Only members of Governor Oyetola’s group, IleriOluwa were given form. This is a plan to manipulate the congress. The National Secretariat of our party should know this.

“We wanted to take our protest to the State Secretariat of our party but the Governor has stationed political thugs there. They planned to attack us and we do not want bloodshed. But our voice will be heard. We don’t want consensus in Osun and the congress committee should be allowed to do its job.”

Among the protesters was Mrs Opeyemi Adetipe who condemned what she described as “brazen balkanization of the party” by Governor Oyetola and Famodun, accusing them of intimidating and harassing members of the party who do not belong to their camp.

Adetipe said the alleged hijacking of the nomination forms by the duo was an evidence of the politics of division and self destruction being played by both the Governor and the party chairman.

She called on the national leaders of the party to rescue the soul of Osun APC and its members from Governor Oyetola and Famodun.

“We are supposed to go to the party Secretariat but they have stationed thugs there. The Governor is intimidating every member of the party who does not belong to his group, IleriOluwa,” she said.

IPOB declares sit-at-home every Monday, until Kanu is released