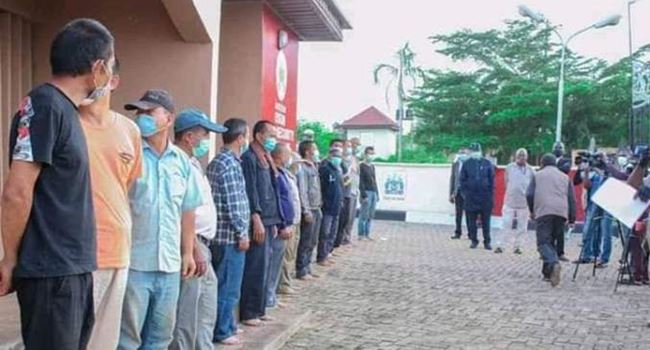 The government of Osun State has arrested 27 illegal miners in the state.

They were apprehended by the state Joint Task Force (JTF), which the state Governor Adegboyega Oyetola, recently inaugurated.

According to the JTF, their arrest followed a coordinated sting operation around Ilesa and Ife axis.

The Deputy Chief of Staff to the Governor, Abdullahi Binuyo, who spoke on the matter said that “no responsible government will fold its arms and watch its land being degraded by unauthorised persons.”

He said, “As part of the government’s economic reforms, solid mineral is a major sector we are looking to explore. For these reforms to work, it has become imperative on the reforms to stop illegal mining and step up enforcement activities. The result is what we are witnessing today.

“The people you see here neither have genuine mining licences nor are they registered with the government. What they claim to have is exploration licences, which does not allow them to mine, the way they are doing. So, we will prosecute them and make them pay damages.

“Apart from flouting government’s Covid-19 order, by refusing to stay at home, they have also created environmental disaster for us, by poisoning our river, which is a major public health concern for us.”

May Zam, one of the arrested Chinese, while speaking, said she never knew what they were doing was illegal mining.

She added that she was working for a company, she supposed had a mining license.

Though she did not mention the name of the company, she however, said the company has a Nigerian sponsor.