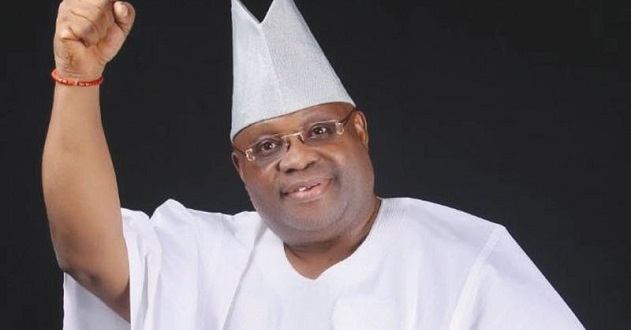 The emergence of Senator Ademola Adeleke as the candidate of the Peoples Democratic Party (PDP) in the September 22 governorship election in Osun State has been strongly opposed by the aspirants he defeated at the party primary.

The aspirants, seven of them, on Thursday called on the national leadership of the party to immediately cancel its decision to have Adeleke as the party candidate for the coming election.

At a joint press conference in Oshogbo, the Osun State capital, Dr. Akin Ogunbiyi; senators Olasunkanmi Akinlabi; Felix Ogunwale; Professor Adeolu Durotoye and Dr. Ayoade Adewopo, who are some of the defeated aspirants, insisted that Adeleke’s candidature must not be allowed to stand by the PDP.

Other aspirants who are part of the demand but were absent during the conference were, Messrs Adejare Bello and Jide Adeniji.

The aspirants said in their statement read by Olasunkanmi, “The candidacy of Senator Ademola Adeleke will further divide rather than unite the PDP in Osun State in view of the fact that a great number of the party members will not feel secure working for him, because of the very controversial circumstances of his nomination.

“The PDP may not be able to secure the support of critical stakeholders in the state with Senator Adeleke’s candidacy, because of his not too impressive public conduct as a senator of the Federal Republic.

“In view of the foregoing, therefore, we the under listed aspirants call on the national leadership of our party to rescind its decision on the nomination of Senator Ademola Adeleke as our candidate for the September 22 governorship election.”

Adding to the statement, Ogunbiyi said that he would not leave the party but would not stop to demand that the party do the right thing.

“We are actually facing a challenge at present. It is a storm that will pass and I, Dr. Akin Ogunbiyi and other aspirants will not leave the PDP under any guise. We believe that the leadership of the party will do the right thing. We will stay together and fight to uproot the government of APC.

“The good people of Osun State should remain calm. The PDP is the hope of Osun State. There is no alternative party that can rescue Osun State and Nigeria. I cannot be a mole in the hands of anybody. With my modest achievement as a village boy with this level of grace God has given me, I cannot condescend to do such dishonorable job,” he said.

‘We revolt because we cannot breathe’, Sani says as he confirms APC membership