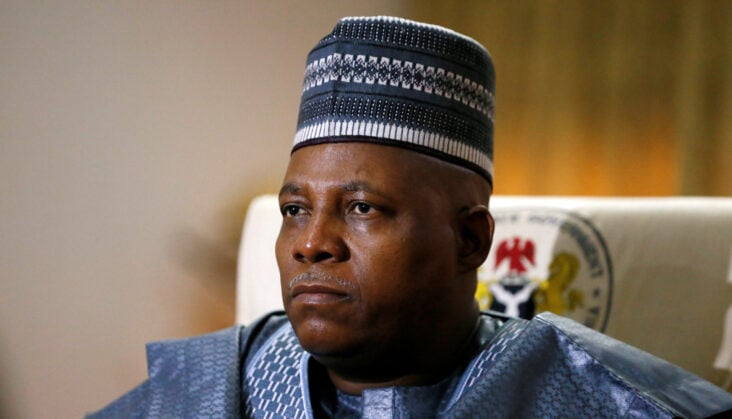 The North-East Youths and Stakeholders Forum of the All Progressive Congress (APC) on Saturday slammed the spokesman of the APC Campaign Council, Festus Keyamo, for branding its decision to withdraw support for the party’s vice presidential candidate, Kashim Shettima, as a blackmail.

The forum had threatened to dump the former Borno State Governor for his nonchalant attitude since his emergence as VP candidate, alleging it had led to mass defection of members to the opposition party.

But Keyamo in a statement on Friday said the grievances of the North-East youths regarding defection of members would be addressed.

The Minister of State of Labour and Employment, however, cautioned the group against overrating itself and exaggerating the situation.

“If some groups think they are the most important or deserve to be pampered more than others, we will not accept it. That would be subtle blackmail. The vice presidential candidate is the one who wants to treat all of them as equal as possible. He is obviously not going to pamper some over others. All groups are important”, Keyamo said.

Reacting to Keyamo’s submission in a statement signed by its Acting Chairman, Shaibu Tilde, the group knocked Keyamo for taking its threat as sort of blackmail.

The group accused Keyamo of being ignorant of its power in the North-Eastern region of the country and insisted on its plan to withdraw support from Shettima ahead of the polls if the ruling party fails to address its grievances.

“What has however become a source of worry for our group is the unsavoury and scathing attack launched at us by the APC presidential spokesman Barr. Festus Keyamo.

“While we intend not to join issues with Mr Keyamo, we are however obligated to set the records straight so as to mitigate the poignant narrative Mr Keyamo is constructing around our noble group and clear intentions and love for our great party.

“We shall continue with that mantra of speaking out to power for the love of our dear party, the All Progressives Congress not minding whose ox is gored.

“Firstly, it’s clearly manifest that Mr Keyamo does not understand the calibre of youth and the extent of their fibres in the Northeast region of the party and therefore can resort to calling us names as ‘cheap blackmailers’. This is rather unfortunate that the spokesman of our party has tuned his war arsenal against his fellow party men with a common goal to win the 2023 election.

“No one can deny that gale of defection our party has suffered in the region in the last few months. Our group noted with dismay that the Senior Advocate of Nigeria rather than being introspective on the germane issues we raised that are affecting the fortunes of our party in the region instead chose to play to the gallery by calling us blackmailers and attention seekers. This is unfortunate and quite shameful.

“Secondly, we wish to remind Mr Keyamo that we are not seeking empty attention nor do we want to be pampered. It is important to school Mr Keyamo that this group did not emerge from the blues. We have been on this journey from time to set. For the records, this group has spent millions of naira mobilising support for both Sen. Kashim Shettima and by extension the APC.

“We have held many press conferences and organised strategic meetings with relevant stakeholders within and outside the North-East region all in support of our great party, APC. How can we now stand and watch what we have laboured for slip away from us when we have an opportunity to avoid it? We cannot at this moment risk an avoidable shipwreck by the action of one reckless individual. We cannot simply shut up until the right thing is done in the interest of our party.

“Thirdly, Mr Keyamo has blatantly discredited our defection statistics asserting that the entire Northeast region will have nobody to vote for the APC if 8 million voters defect from the party. In his views, the total number of registered voters in the North-East put together will not be up to 8 million but the recent figure of registered voters released by the Independent National Electoral Commission shows that out of the 93.5 million people registered, North-East region has a total of 12.5 million voters. The figure has therefore vindicated us and expose the ignorance of Mr Keyamo and his skewed narrative on our ground.

“Finally, it will do our party much good to address the gale of defection it’s suffering from the region as a result of the action of our Vice Presidential Candidate Kashim Shettima. Turning a blind eye to grievances will amount to fatal consequences. We the North-East APC youth stakeholders remain committed to the success of our party and its presidential candidate Asiwaju Bola Ahmed Tinubu come February 25.”