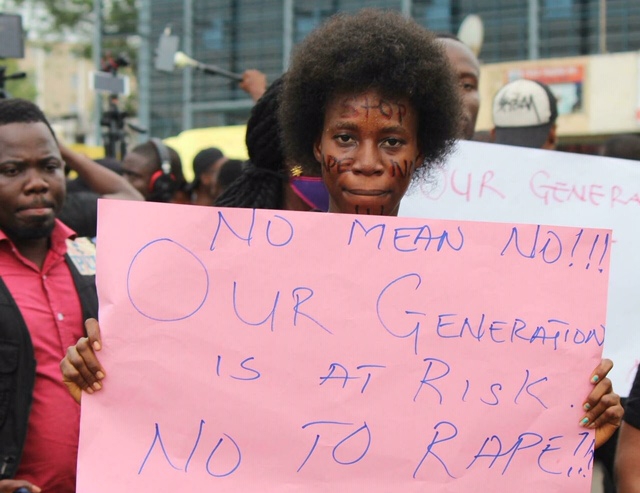 There was outrage in Liberia following the death of a 13-year-old girl who was allegedly r*ped by a 47-year-old man, Prince Massaquoi, in the capital, Monrovia.

On Wednesday, women groups, human rights activists, men and youths, dressed in predominately black outfits and holding anti-rape placards, descended on the Capitol Building in protest over the death of the teenager whose name was given as Blessing Molton.

A girls’ right activist, Mrs. Ne-Suah Beyan Livingston, who addressed members of the Liberian Parliament, said Massaquoi raped Blessing a week ago in the Camp Johnson Road community in Monrovia, but she died on Monday, the day she was to undergo medical surgery.

“Her family confirmed her body and private parts became swollen and she bled profusely as a result of the brutal rape carried out by Massaquoi,” activist said.

“Young Blessing’s death has sparked national outrage and raised questions about the sincerity of government’s commitment of tackling rape and other sexual and gender-based violence.

“13-year-old Blessing Molton died as a result of rape by the 47-year-old man. This is not our first, second or third time coming to the Capitol Building, because our children are dying.

“Some men are so cruel and nothing is being done to them, so we are here to seek justice. We came to the Capitol because our representatives we voted for promised us that if anything happens, we should call upon them, so this is why we are here.

“A girl whose parents voted for you to become a lawmaker is dead, so we want you to do something as our lawmakers,” Ne-Suah Beyan Livingston, who runs a safe home, Rescued, Abandoned and Children in Hardship (REACH), said.

India is highest employer of labour in Nigeria after govt —Envoy

Kenyan man arrested for murder of his four-month-old baby