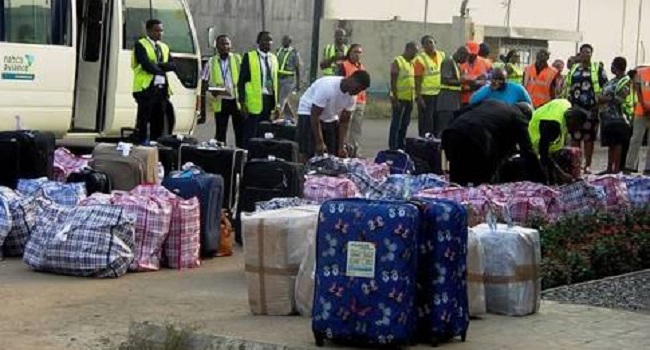 No fewer that 171 Nigerians that were stranded in Libya on Friday returned to Nigeria.

The returnees were received by the operatives of National Emergency Management Agency (NEMA).

While addressing the newsmen, Idris Muhammed, Coordinator, Lagos Territorial Office of NEMA, who was represented by Ibrahim Farinloye, Public Information Officer, said the returnees arrived the Cargo Wing of the Murtala Muhammed International Airport about 1.10 a.m. on Friday.

He added that they arrived aboard an Al Buraq Airline aircraft with registration number 5A-DMG and flight number UZ 196/25.

According to him, the returnees were brought back by the International Organisation for Migration (IOM) and the European Union, under the Assisted Voluntary Returnees (AVR) Programme.

He however, advised Nigerian youth to be wary of overseas love advances from strangers, noting that this was now one of the tactics being used by human traffickers, to lure them outside the country.

The coordinator said the traffickers were now contacting ladies via social media apps, especially Facebook and WhatsApp, and making fake marriage proposals to them, to deceive them into travelling outside Nigeria.

Read also: Why El-Zakzaky, Dasuki, others are still in custody despite court orders – Malami

Going further, he cited a particular case when a lady sought advice about a man who simply called himself Ali, who claimed to be living in Sudan.

“Upon critical observation, the code number of the caller indicated that it belongs to Libyan code, and the man that makes video calls was an Arab; but he was not making statements for the lady to hear him.

“It was understood that the man cannot communicate in English, but someone behind the scene was responsible for the chatting with the lady,” Muhammed said.

He urged them to put behind their experiences in the volatile North African country and take advantage of the opportunities being put in place by the federal government, IOM and other development partners, to forge a better future for themselves.

Mr Muhammed advised young Nigerians planning to leave the country to make use of the Migrant Resource Centres, jointly set up by the government and the IOM, to know more about their destination countries.

The NEMA said as of March 15, 12,574 Nigerians had returned from Libya under the Assisted Voluntary Returnees Programme, which began in April 2017.

However, NEMA said over 4,900 of the returnees have also been trained on various skill acquisition and empowerment training by IOM through special funding facilitated by the EU.