A petition calling on the United Nations to strip ‘Koko Master’ Dapo Oyebanjo aka D’Banj of his appointment as United Nations Ambassador for Peace has been initiated with over 15,000 people signing the online appeal thus far.

The petition instigated by one E.Pooola on the Change.Org website which had been signed by 15,320 as at 4.33pm on Friday also called on brands such as Heritage Bank Africa, One Africa, CSA Global, to severe their commercial relationship with D’banj and stand in support of victims of sexual violence.

“We call on the United Nations and United Nations Women Africa organisations to remove Nigerian artiste Mr Dapo Oyebanjo as a youth ambassador and distance themselves from his actions following the sponsored kidnap of Seyitan who accused D’Banj of rape and sexual assault which happened in 2018.

“Women in Nigeria are increasingly at risk of sexual violence and the United Nations and United Nations Women Africa as an entity committed to the empowerment of women should not be seen to associate themselves with alleged rapists, abusers, and kidnappers.

“We ask the United Nations and United Nations Women Africa to support and lend their influence in helping Ms Seyitan Babatayo get justice for the abuse she endured in 2018 and the harassment and bullying in the past weeks,” the petition read in part.

D’banj had given Ms Seyitan 48 hours ultimatum to pay N100million or face legal action after he debunked her claim of raping her in a hotel room on the 30th of December 2018.

This came after an immediate investigation into the rape allegations levelled against D’banj by his accuser, Ms Seyitan was ordered by the Inspector-General of Police, Mohammed Adamu.

The order was contained in a letter signed by the Principal Staff Officer to the IG, DCP Idowu Owohunwa, with reference number CB.7000/IGP.SEC/ABJ/VOl.484/801, cited on Thursday.

The letter by the IG which was in response to a petition written to the IG by Mr. Tommy Ojoge-Daniel, a lawyer to Miss Seyitan Babatayo, who accused D’Banj of r*ping her in 2018, was addressed to the Deputy Inspector-General of Police, Force Criminal Investigation Department, Area 10, Garki, Abuja. 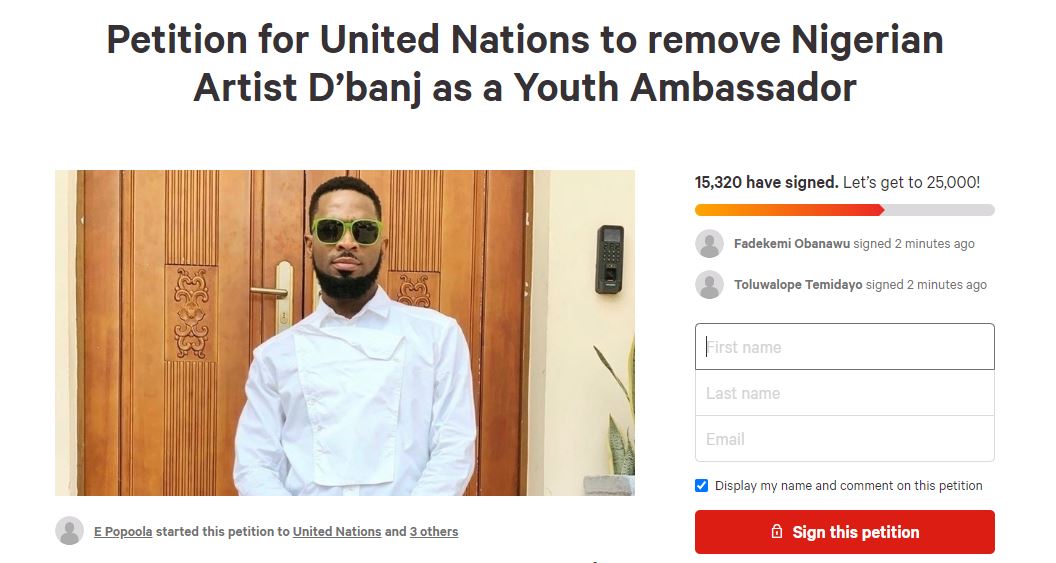