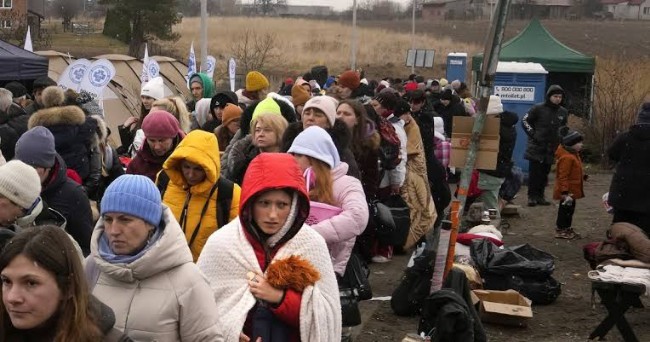 The United Nations High Commissioner for Refugees (UNHCR) on Monday, said over 3.5 million people from Ukraine, including women and children, have fled the country following Russia’s invasion on February 24.

The UN body added that women and children accounted for 90 percent of those who have fled, while Ukrainian men aged 18 to 60 are eligible for military call-up and cannot leave the country.

“Over the last four weeks, the world has watched in disbelief. Countless lives have been lost while millions of others have been completely upended,” UNHCR chief Filippo Grandi said in a statement its website.

“By our records, well over 3.5 million people, including women and children, have fled Ukraine into neighbouring countries.

“Millions around the world were rightly moved by the extreme plight of the Ukrainian people. Their pain and sorrow… loss and anguish, and relief at finding safety and trepidation of an uncertain future,” Grandi said.

UNHCR said 535,461 Ukrainians had made their way into EU member Romania, including a large number who have crossed over from Moldova, wedged between Romania and Ukraine.

It also said 365,197 Ukrainians had crossed into the non-EU state, one of the poorest in Europe. with most transiting through the smaller nations, en route westwards to Romania and beyond.

“The number of Ukrainian refugees who have crossed into Hungary has reached 312,120.

“A quarter of a million people have made it across Ukraine’s shortest border into Slovakia, at 250,036 Ukrainian refugees, while some 231,764 refugees have sought shelter in Russia since the invasion began ” UNHCR said.

UNICEF, the UN children’s agency, in it’s own statement also on Monday, said more than 1.5 million children are among those who have fled the country.