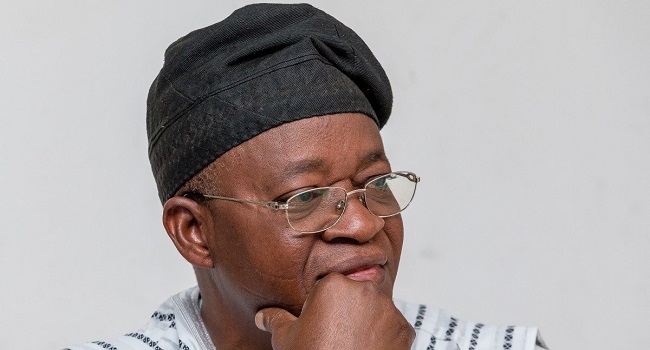 He said his government which has zero tolerance for crime was ready to go any length to ensure that criminals in the state are not given breathing space.

He also said his government was already giving adequate supports to security agencies in the state to achieve the fit.

The governor, who solicited the continued support and cooperation of the security agencies, said the state would continue to work in partnership with relevant security agencies and stakeholders to strengthen security and ensure maximum protection of lives and property of the citizenry.

“It is on the basis of this realisation that I would like to salute the vision and leadership of the Chief of Air Staff and appreciate his contributions to the security needs of the nation,” the governor said.

He said the state has been working in collaboration with other Southwest states to enhance the security architecture in the region.

Oyetola said: “I thank President Muhammadu Buhari for approving the establishment of an Air Force Base in Ipetu-Ijesa to promptly respond to emerging security challenges in the Southwestern part of the country and for providing necessary support to sustain the operations of the Base.

“I also understand that very soon, a Regimental Centre Annex to train Special Forces personnel will come on stream here. I would like to thank the Chief of Air Staff for considering Osun for this all important centre.

“I solicit the continued support of the Air Force in our resolve to keep the Region and our people safe,” Oyetola said.

On his part, Chief of Air Staff, Air Marshal Sadique Abubakar, commended Oyetola and President Buhari for being supportive to the Force in its quest to provide adequate security in the country.

He said the Force has been enjoying hands of fellowship and prompt support from the state and federal governments – a gesture he described as a motivation and encouragement.

Abubakar, who was represented by the Chief of Policy and Plans, Nigerian Air Force Headquarters, Air Vice Marshal Napoleon Bali Rinkap, pledged that the Force will re-double its efforts at ensuring the security of lives and property of the citizens.

TIV YOUTHS TO BUHARI: Deploy special forces to quell feud with Jukun, we risk being wiped out