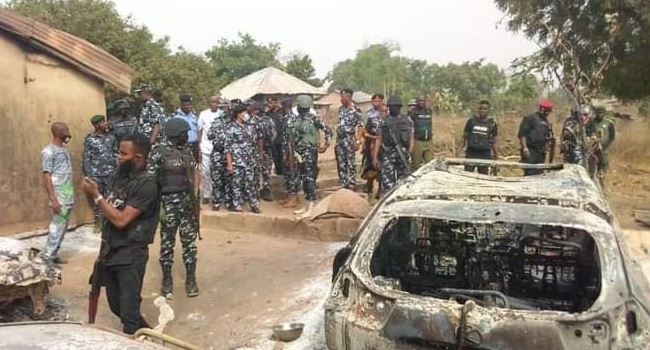 The Seriki Fulani of Igangan in the Ibarapa area of Oyo State, Saliu Abdulkadir, on Thursday lamented that the crisis that engulfed the ancient town led to the death of seven of his kinsmen, while 12 vehicles belonging to him, his children and visitors were burnt, including his houses.

Abdulkadir, who complained that his household was not fairly treated, spoke for the first time since he was forced out of Igangan by residents led by Yoruba activist, Sunday Igboho, who accused him of complicity in the widespread killings, kidnapping, rape and other criminal activities in the area, at a press conference in Ilorin, the Kwara State capital on Thursday.

Denying any involvement in kidnapping and other criminal activities in the community, the Seriki Fulani said seven of his kinsmen died, while his property worth over N500m was destroyed in the violence.

He said: “My houses, 12 vehicles belonging to myself, my children and some visitors were burnt and seven of my people were killed.”

Abdukadir however confirmed that there were cases of kidnapping and raping in the community but insisted that both Yoruba indigenes of the area and Fulani were responsible.

He also claimed to have always worked with security operatives in fighting the crimes in the area to the knowledge of leaders and elders of the community.

“There was no case of farm destruction reported to me that I will not send people to go and look at the farm that was destroyed. If discovered that it’s true, I will order the Fulani to pay money to the farmers”, Abdukadir said.

He said when a Fulani boy was involved in raping, he investigated the matter and handed over the boy to the victim’s family

“I have been living in Igangan for over 50 years without any challenge from anybody either in Igangan or any other places”, he added.

Abdukadir also called on the Federal Government to investigate the allegations and ensure that the culprits are brought to book.