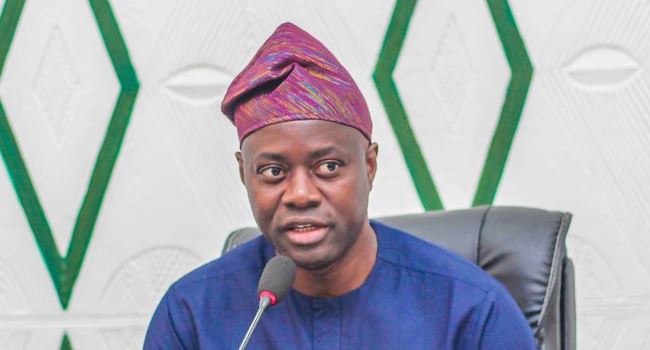 The Oyo State chapter of the Peoples Democratic Party (PDP) has denied that the state Governor, Seyi Makinde is at war with the Federal Government, or any of the agencies of the central government in the state, contrary to reports in the media being pushed by the opposition.

The PDP stated this in its reaction to an allegation by the state’s chapter of the All Progressives Congress (APC), accusing Makinde of engaging in a face-off with the Federal Government and some of its agencies.

The Publicity Secretary of PDP in the state, Akeem Olatunji, in a statement on Tuesday, described the allegation as baseless and non-existent, adding that the claimed face-off only existed in the crude imaginations of the APC leaders.

He said: “Governor Makinde or the Oyo State government is not in a face-off with the Federal Government or any of its agencies. The face-off APC advertised exists only in their crude imaginations.

“The position that Makinde holds the Office of the President in low esteem was a falsehood from the pit of hell and it justified our earlier position that Oyo APC is playing out an orchestrated plan to heat up the polity with a view to achieving their primary objective of ‘bringing down Makinde at all cost.

“The Oyo APC’s penchant for telling chronic lies in the name of playing politics is not only unrivaled but unprecedented. The accusation that Makinde does not exchange communication with the Presidency is actually too childish. If the governor communicates with the Presidency, is he expected to advertise it? The APC has a very poor understanding of governance; this is the reason it wasted public funds on advertising eight years of monumental failure.

“The Office of the President and Commander-in-Chief of the Armed Forces is not one that governors should write love letters on a daily basis. So, if there is no need to engage the Presidency, Makinde would not because he wanted to please some misguided souls in APC to begin to bombard the Presidency with ‘Please Call Me’ or ‘Please Notice Me’ text messages for publicity stunts.

“It is heart-warming that the APC actually conceded that Makinde is not opposed to all federal agencies but they should add anti-graft bodies like EFCC, ICPC and probably Ministry of Interior, which controls the Correctional Facilities to the list of organisations in Makinde’s good book, because that is where APC leaders who ran Oyo State aground, with nothing tangible to show for billions of Naira accrued to the state in eight years, will end up.

“It should be pointed out that Makinde has the highest regard for all federal agencies and the Federal Government. But he will not shy away from his responsibility as governor of Oyo State because he wants to impress some group of disgruntled elements, constituting themselves as the opposition where in actual fact, they are mere agents of destabilization.

“First, the APC made reference to Oyo State government having issues with Nigeria Railway Corporation over landed properties, but that is just its usual way of advertising its folly. APC should not be dabbling in issues they know nothing about as it will amount to dancing naked in the market square.

“Second, the Oyo State Government appreciated the Federal Government for donating 1,800 bags of rice and when it was found out that the rice was not safe for consumption, the government rejected them and asked for better ones. But if the Oyo APC, because it wants to continue to be in some people’s good books or because it wants to continue to justify the favours it is receiving from some quarters, thinks the government should not have rejected the spoilt rice, they can come to the Secretariat to collect the rejected rice and eat them.”

The PDP, while commending the Makinde-led government on the way it had handled the fight against COVID-19 so far, called on the people of the state not to pay attention to APC, which “seems to be more interested in seeing Oyo State suffer during this trying period.

“On the management of Coronavirus in the state, available evidence has shown that the state government is getting things right. Unfortunately, the APC and its leaders are sad, because they revel in seeing Oyo State people in sorrow just because they voted for Makinde. The APC craves for deaths in hundreds in Oyo State; their leaders like Teslim Folarin cry about that, asking that the state should be locked down so that the people can suffer.

“But Makinde has been focused on stopping the virus and in doing that, he has collaborated with all necessary agencies. The National Centre for Disease Control (NCDC) was in Ibadan recently and it gave credit to the state government for the good job it did in setting up the Infectious Disease Centre, Olodo, which it described as world-class.

“The governor had equally commended the Minister of Health on the job the ministry is doing nationally on COVID-19. So, we wonder where the Oyo APC got the twisted logic that Makinde was fighting federal health institutions from? We know that their utmost prayer is to see Makinde fail, that is why they are trying to impugn him by insinuating that he is fighting the UCH. But for their information, the UCH and the Oyo State are now collaborating on many fronts. If the APC is sad about this, they should go into mourning.

“Makinde has, in close to 12 months, redefined good governance in Oyo State: It is about putting the interest and wellbeing of the people of Oyo State first and not about docility or subservience to the Federal Government. The fact that Makinde is a PDP governor does not make him an enemy of the Federal Government and he has made this clear in different ways.

“However, the APC in Oyo State has the undying ambition to derail Makinde’s government and so they will do anything including trying to incite APC leaders at the federal level against the Oyo State government. APC’s statement should be clear and undisguised; it is another attempt to make sure the people of Oyo State suffer for voting their party out of office after eight years of woeful performance”, the ruling party in the state said.

Related Topics:COVID-19Seyi Makinde
Up Next

How ‘striker’ Solskjaer is making me a better striker —Ighalo