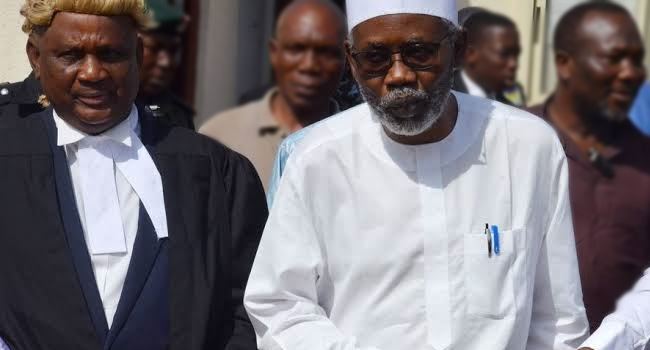 Chief Mike Ozekhome (SAN), the counsel to the immediate past Attorney General of the Federation, Mr. Ibrahim Bello Adoke, on Thursday lamented the alleged refusal of the Economic and Financial Crimes Commission (EFCC) to release his client a week after meeting his court imposed bail conditions.

Ozekhome also declared that it was clear from the actions of the EFCC that Adoke was no longer being prosecuted but persecuted.

The Senior Advocate of Nigeria said this in a statement on Thursday, adding that it was unfortunate that about a week after Justice Idris Kutigi of an FCT High Court granted Adoke bail, the EFCC had refused to release him.

According to him, before the arraignment of his client at the FCT High Court, Gwagwalada, on January 22, 2020, Adoke had already been illegally and unconstitutionally detained for extra six days, well beyond the 28 days earlier obtained through the ex parte court orders; or the period allowed by section 35 of the 1999 Constitution, which prescribed 24 hours only.

The former AGF was finally arraigned on January 27 while he was granted bail on January  30 by Justice Kutigi after arguments for his bail was taken on January 28.

Ozekhome said: “It is disheartening that despite meeting the bail conditions imposed by the court, since the January 30, 2020, the EFCC is still holding our client in permanent custody, till date.

“From the foregoing, it is crystal clear to any discerning observer that our client is no more being prosecuted, but is being persecuted, by the EFCC.”

ICPC insists Obono-Obla is still on list of wanted suspects