Ozekhome faults Buhari over retirement of service chiefs, says they deserve to have been sacked | Ripples Nigeria 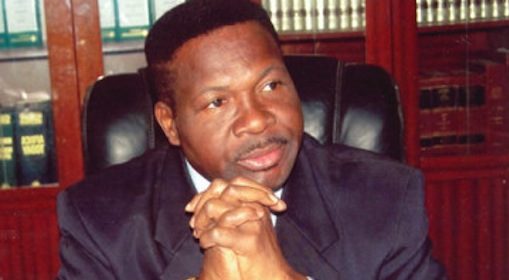 Ozekhome, a fierce critic of the Buhari administration, also considered their purported resignation, instead of outright sack, as mere soft landing provided for the service chiefs, who many Nigerians have for long clamoured to be sacked for their inability to proffer solutions to the spate of insecurity in the country.

The President, according to Femi Adesina, thanked the retiring service chiefs for their overwhelming achievements in the search for enduring peace in the country.

However, Ozekhome, in an article titled ‘Buhari’s Overdue Sack of Spent Lack Lustre Service Chiefs’, said he would not only disagree with the President on the ‘overwhelming achievements’ but “would say that is the unkindest oxymoron and irony, of all. I beg to differ sir, Mr President.”

The article reads in part: “However, in relieving the Service Chief’s tired necks of decaying Albatross, Buhari made a startling statement through his spokesman, Femi Adesina.

“First it was that they “resigned” and the President “has accepted the immediate resignation of the Service Chiefs and their retirement from service”. Soft landing window-dressing, I guess! Nigerians are not amused. In more civilised countries, it would be announced that they had been out rightly sacked. Yes, summarily dismissed, for abysmally failing to live up to expectations.”

Continuing, Ozekhome said: “But, Buhari’s more shocking aspect of the removal of the Service Chiefs from office, which has so far shocked Nigerians, is where he said he was congratulating them for their “overwhelming achievements in our efforts at bringing enduring peace to our dear country”. “Enduring peace”? Is this genuine peace, or peace of cemetery or the grave yards? My dictionary tells me that peace means tranquillity, calm, calmness, law and order, harmony, placidity, rest, armistice, friendship, brotherhood, serenity, contentment, amity, reconciliation. Can any Nigerian hold the Holy Bible, Holy Quran, or piece of iron (depending on your faith), and swear, that we have any of the above?

While welcoming the new service chiefs, the Senior Advocate of Nigeria, wondered if the change is going to be merely cosmetic or real and tangible.

“The new Service Chiefs appear younger and lower in rank than their pot-bellied predecessors.

“That is all we can say for now. Is this change of batton merely cosmetic? Is it new wine in old calabashes? Has anything suddenly changed in terms of new equipment, surveillance and intelligence capacity and capability? Does the hood make the monk? Can a book’s worth be known by the beauty of its cover? No. It is not yet Uhuru”, he said.

He however called for a total overhaul of the Nigerian security architecture in a way that would meet the urgent and immediate needs of the country.

“What all this boils down to is that Nigeria needs to re-engineer, refurbish, retwine, reform and re-order her total security apparatchik. Indeed, it needs a complete overhauling, such as to bring it in line with modern international best practices in security engagement. The current behemoth, elephantine and unwieldy Police Force needs immediate decentralization, to bring about federal, regional, state, LGA and community policing. This means that sections 214 and 215 of the 1999 constitution should be amended immediately with the urgency of NOW”, he submitted.

Related Topics:Ozekhomeservice chiefs
Up Next

Abuja under siege by bandits, but DSS, army after agitators in south-east