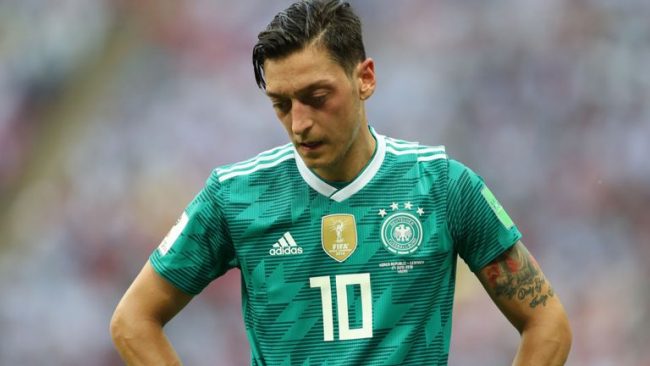 In what looks like a stand against racial discrimination in football, Arsenal midfielder Mesut Ozil says he no longer wants to play international football for Germany.

“I will not sit back and do nothing about it. Racism should never, ever be accepted,” the 29-year old wrote in a lengthy statement he posted on Twitter.

Ozil, who was a member of the German team that failed to go past the group stage of the just-concluded FIFA World Cup, said he was being blamed for their disappointing outing in Russia.

He said treatment he had received from the German Football Association (DFB) had made him “no longer want to wear the German national team shirt”.

“It is with a heavy heart and after much consideration that because of recent events I will no longer be playing for Germany at international level whilst I have this feeling of racism and disrespect.

“I used to wear the German shirt with such pride and excitement, but now I don’t. This decision has been extremely difficult to make because I have always given everything for my teammates, the coaching staff and the good people of Germany,” he wrote.

In May, Ozil was criticised after being photographed with Turkish president Recep Tayyip Erdogan at a London event.

Ozil attended the event with fellow Germany international Ilkay Gundogan. Both Ozil and Manchester City’s Gundogan are of Turkish descent.

Afterwards, photographs were released by Turkey’s governing AK Party in the build-up to elections in the country, which Erdogan won outright, and this led to many German politicians questioning Ozil and Gundogan’s loyalty to German democratic values.

In the statement, Ozil clarified that the meeting with the Turkish president is not political, and added: “But when high-ranking DFB officials treat me as they did, disrespect my Turkish roots and selfishly turn me into political propaganda then enough is enough.”

The midfielder said the past couple of weeks have given him time to reflect, as he did not fail to mention that he and his family had received hate mail, threatening phone calls and comments on social media.