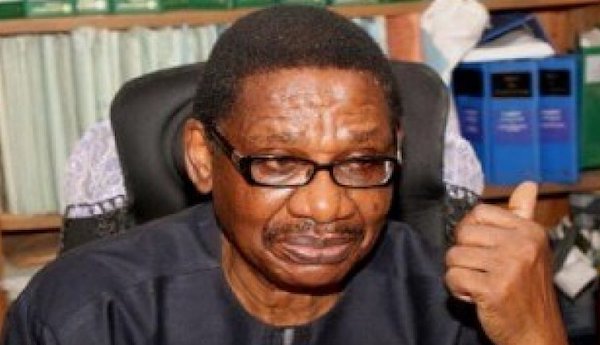 The Presidential Advisory Committee Against Corruption (PACAC) Wednesday described as fraud, a proposed bill for the amendment of the Act establishing the Economic and Financial Crimes Commission (EFCC).

PACAC, in a statement signed by its Chairman, Prof. Itse Sagay, urged the National Assembly to reject the move, saying the planned amendment of the EFCC Act was part of “an ongoing very sinister and dangerous attempt to demolish the anti-corruption infrastructure in the country and return it to the dark days of pre-2015”.

The Attorney-General of the Federation and Minister of Justice, Abubakar Malami, who has been unrelenting in his quest to streamline the activities of the commission has been linked to the controversial move to amend the Act establishing the anti-corruption agency.

PACAC insisted that those behind the move to amend the Act “are the representatives of the corrupt establishment that brought this country to its knees and subjected the citizens to humiliation as a result of an extremely negative reputation internationally.”

According to the committee, the controversial bill seeks to weaken the EFCC and its officials and confer an enormous power of control of the commission on the office of the Attorney General of the Federation and Minister of Justice.

It added that other highlights of the proposed bill included the repeal of the current EFCC Establishment Act which had been a spectacular success and had brought Nigeria into limelight as a major force against corruption.

READ ALSO: PACAC reacts as member speaks on Malami, other power blocs and the plots to oust Magu

The statement read: “With all the above-established facts, the gravity of the proposed change becomes overwhelming.

“When in addition to all this, we recall the well-known proclivity of the Attorney-General for entering nolle procequi in favour of major political and governmental figures, this move to effectively scrap the EFCC becomes more alarming.

“We, therefore, call on the National Assembly and all Nigerians to vigorously reject this attempt to perpetrate a fraud on the nation by effectively scuttling the EFCC and shutting down Nigeria’s anti-corruption war.

“The bill also seeks to replace the Executive Chairman of the EFCC with a Director-General who is effectively to be appointed by the Attorney-General. This eliminates the EFCC’s freedom and autonomy and replaces it with an entity under the complete control of the AGF.

“Others provisions include the replacement of the Board of EFCC with Directors who are effectively to be appointees of the Attorney-General.

“And the Elimination of the position of the Secretary of the EFCC, a critical officer who serves as the institutional memory and the Administrative Head of the Agency.”