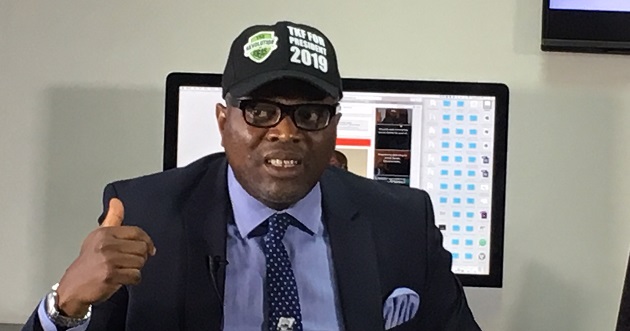 They insisted that the group had agreed that a consensus candidate will only emerge from those that emerge as the candidates of their various political parties.

This was disclosed in a statement jointly issued by Sina Fagbenro-Byron, Tope Fasua, Jaye Gaskia and Cde Eragbe Anselm, in response to the reported choice of Durotoye on Thursday.

According to them, though the group had agreed that presenting a consensus candidate is the only way they can hope to get on the ballot paper and achieve their aim of produulcing the next president of the country come 2019, such a candidate was to emerge from among candidates of political parties and not aspirants.

The statement reads: “We want to state very clearly, that we remain committed to this process of producing from among ourselves a consensus candidate; and through our collective efforts, a strategic alliance of our political parties, as well as other pro-people and anti-establishment political formations across the country.
In our country at present, by our laws, only candidates presented by registered political parties can contest in elections.

“The strategy with the most chance of being successful in our determination to convert the 2019 general elections process into a revolutionary process that can upstage the current failed ruling class and its establishment; is one that can ensure that whoever we chose as our consensus candidate, actually gets on the ballot, and is a candidate in the general elections.

“The only way to guarantee that such a consensus candidate will be on the ballot, is to allow party processes to conclude, such that through party primaries, party candidates then emerge.

“Once party candidates have emerged, whoever amongst us that we chose, through a broad process that will include our parties, other stakeholders, and citizens; will be assured to be on the ballot, because he or she would already have emerged as the candidate of a party registered to participate in the general elections.

“Our believe is that the opposite strategy of arriving at a consensus aspirant before party primaries, is a strategy with no assurance of success.

“Given that we belong to different parties, there is no assurance that any consensus aspirant agreed upon by us will go on to win the primary of his or her party and will therefore eventually emerge as a candidate that will be on the ballot, and that contest in the general elections.

“It is in the light of the foregoing that we the undersigned Visionary Presidential Aspirants reaffirm our commitment to a process of consensus building, towards the emergence of a viable consensus Presidential Candidate; who will the Flag Bearer of a strategic alliance of our political parties and other political formations.

“Furthermore, we restate our commitment to the strategy of building a United Front of radical pro- people forces, as only such a United Front can upstage the discredited ruling class, and undertake the arduous task of Reclaiming our Humanity, Rebuilding our country.”

OSUN GOV POLL: Police clarify controversies on number of commissioners to be deployed