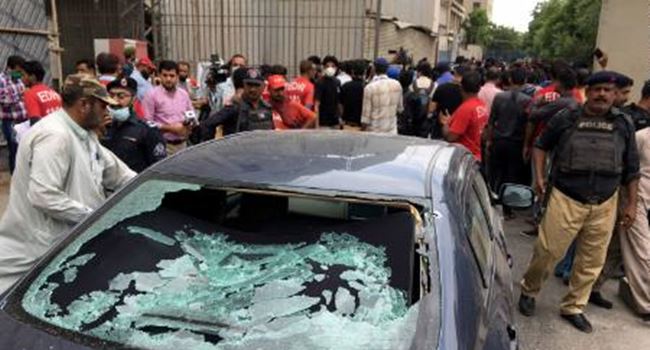 A tragic scene played out in Pakistan when four heavily armed gunmen stormed the Stock Exchange building located in Karachi, killing no fewer than three people and wounding many others.

Reports say the gunmen who stormed the building at 10am (05:00 GMT) Monday morning as trading began, fired indiscriminately as they entered the premises of the Stock Exchange.

The assailants who were carrying hand grenades and firing automatic rifles were later killed by police and security forces responding to the attack, said Faisal Edhi, head of the Edhi charity and ambulance service which serves the city.

“The attackers had hand grenades with them. Two of them were killed at the gate, and two were killed further inside the building complex,” said Edhi, whose office is located opposite the PSX in Karachi’s main commercial district.

“We were hearing explosions going off [from our building],” he said.

The dead include the four attackers, a policeman and two civilians, said Edhi. Seven others had also been wounded in the attack, he said.

Senior police official Sharjeel Kharal told reporters outside the PSX building that the security operation to clear the building was complete.

“Right now the information is of four [attackers], all four killed. One sub inspector was killed and three policemen were wounded, and two of the stock exchange’s guards were wounded as well,” he said.