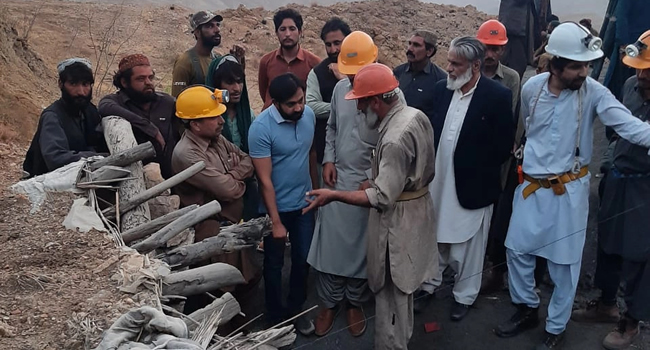 Five miners and two rescuers have died of suffocation after a methane gas fire broke out at a Pakistani coal mine in Balochistan, located in the southwest of Pakistan, making it the second such disaster in the region in a week, officials have confirmed on Tuesday.

The fire took place at a mine in the Tor Ghar area of Harnai district, about 170km (105 miles) west of the provincial capital Quetta, a government official, Sohail Anwer Hashmi, said.

“The coal miners entered inside the mine to fill the cracks caused by the fire, but they died of asphyxia caused by the deadly methane gas.

“The coal miners were working 1,400ft (427m) deep inside the mine when the incident was reported. The bodies of the seven miners were recovered after rescue operations,” Hashmi said.

The accident was the second coal mine disaster in Balochistan within days, after six miners were trapped and killed in a methane gas explosion in the Marwar coalfield on Thursday.

A month earlier, four miners had been killed by an explosion inside a coal mine in Harnai while in 2020, 99 coal miners and labourers were killed in 72 incidents in Balochistan, according to government data.

“Unfortunately, the poor coal miners are not well-trained to handle any emergency-like situation and they don’t have adequate safety equipment,” said Hashmi.

Shafqat Fayaz, chief inspector of the provincial mines department, also blamed the accident on a lack of training.

“The five coal miners entered into the mine but forgot to open the ventilation which filled the mine with methane gas. Later, two rescuers also died in attempt to extract the trapped miners,” Fayaz said.

Balochistan, Pakistan’s largest but least populated region, is rich in minerals and natural resources such as coal, natural gas, copper, sulphur and other reserves.

The province is also Pakistan’s poorest and regularly ranks at the bottom of the country’s socio-economic indicators on healthcare, education and population welfare.

One in 35 graduates in Nigeria is jobless