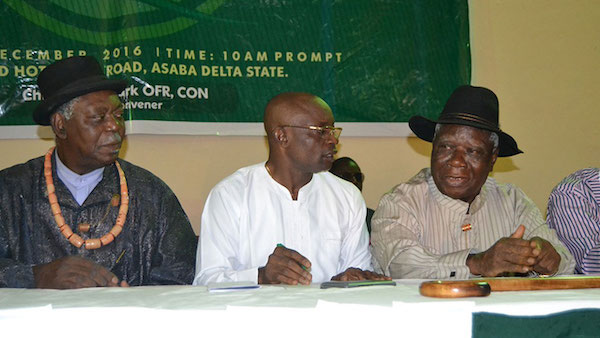 The Pan Niger-Delta Forum, PANDEF, the apex Socio-cultural Organisation of the Niger Delta Region on Wednesday said it was fully behind the demands and agitations by the Gbaramatu Kingdom, Itsekiri and Urhobo groups over perceived injustices being meted out to them.

According to a statement issued by the National Publicity Secretary of the group, Hon. Ken Robinson, the decision was taken after a virtual meeting of the Forum’s National Executive, in consultation with strategic and critical stakeholders, on Tuesday, 14th July, 2020.

“PANDEF fully backs the Demands by the People of Gbaramatu Kingdom, the Itsekiri and Urhobo Groups as germane and congruent to the increasingly untenable ongoings in the Country. The Marginalization and Exclusion Policies, of neglect, discrimination, unfairness and injustice against the Niger Delta People by the Buhari Administration; the abandonment of the Export Processing Zone (EPZ) Gas Revolution Industrial Park Project, the relocation of the Floating Dock, the Ownership of Oil Marginal Fields, and various other issues, raised by the Groups, are issues that PANDEF has been talking about, for too long, now. Sadly, the Federal Government attitude has been a heedless detachment, carrying on with callous ease”, the group said in the statement.

It also noted that the current uproar, necessitating the Oil and Gas-Producing Communities and Ethnic Groups in the Niger Delta Region to issue ultimatums and warnings, to the Federal Government, was not unexpected.

“We had warned that the people would, sooner than later, run out of patience with the Government. The Country should not be surprised to see more Oil and Gas-Producing Communities and Ethnic Groups embark on similar actions. The Buhari Administration cannot continue to go on like this, and expect the people to remain quiet, for ever.
The world is up in arms, with the mantra of “Black Lives Matter”, perhaps we also, now need a *Niger Delta/South South Matters!*”, it added.

The group further lamented that its 16 point demands handed President Muhammadu Buhari during a visit in Novenver 2016 have remained unattended to.

“Recall that, on 1st November 2016, a Delegation of about one hundred Niger Delta people, comprising Traditional Rulers, Eminent Statesmen, Technocrats and Professionals of all spheres, as well as Rights Activists, Women and Youth Leaders, paid a Courtesy call on President Muhammadu Buhari, under the auspices of PANDEF. This was after we had assuaged agitated youths to embrace and declare, a unilateral ceasation of attacks on critical oil infratstructures in the Niger Delta, raging at the time.

“During that visit, which was led by our the National Leader, Chief Dr. E. K. Clark, we presented a 16-Point Demand to Mr. President. The Document encapsulates critical issues, concerns and aspirations of the People, cutting across the entire Niger Delta Region. If the Buhari Administration had given the needed attention to the issues, the narrative, in the Region would have been different, today.

“Unfortunately, the Government, instead of reciprocating the conciliatory gesture of the people of the Niger Delta, by attending to the 16-Point Demand, has continued to demonstrate vexing nonchalance to Niger Delta issues”, PANDEF stated.

It also decried the situation whereby the Niger Delta Region continues to suffer marginalisation and isolation in critical sectors of the country, especially in the Oil and Gas Sector, describing it as inimical, abhorrent, and unacceptable to all fair minded humanity.

“We had asked that Niger Delta indigenes, with the capacity and willingness to participate in the Oil and Gas industry, should be given Right of First Refusal in the Bidding Processes for Marginal Fields and Blocks. We have exhaustively highlighted these issues; writing several Letters, issuing Press Statements, and holding Press Briefings, well publicised across all media. All we get is a tone-deaf rebuff.

“Recently, this immediate past May and June, we wrote two Letters to Mr. President on the discrimination against the Niger Delta people in appointments, by his Administration, particularly in the Nigerian National Petroleum Corporation, NNPC.

“Our National Leader, Chief E. K. Clark, alongside other patriotic Nigerians, are currently in court, over desecration of the Federal Character Law on appointments, by the Buhari Administration.

“All over the world, our oil industry behemoth is now derisively referred to as, “Northern Nigeria Petroleum Corporation, NNPC”, pocketed by an ethnic gluttony!

“No responsible government, that we know of, worldwide, or previously in Nigeria, would do what this Administration is doing to the Niger Delta Region. How do you explain the fanfare accorded the flag-off of the $2.8 billion Ajaokuta-Kaduna-Kano (AKK) Gas Pipeline project, against the abandonment of similar and related projects in the Niger Delta Region, from where the gas would be gotten to supply the celebrated AKK project?

“The state of the East-West road is an ugly stain on Nigeria’s Political Administrative logic, especially for something considered a Signature Project, because of its economic significance. No inch of construction work has been added in five years, by the Buhari Administration.

“There seems to be a deliberate agenda to run the Niger Delta Region to the brink, into the ground. God forbid!”, it stated.

PANDEF further alleged that there is a deliberate attempt by the Federal Government to ensure that every government agency with direct bearing on the development of the Niger Delta Region, and the wellbeing of her people does not function properly.

“Consider the Presidential Amnesty Programme, and the blunt refusal to appoint a Chairman, craftily keeping the Programme under the control and command of the National Security Adviser, achieved through a “Northern” Committee. The current tragicomical shambles of the Niger Delta Development Commission, NDDC, is not anything different, rather, worse.

“Meanwhile, the North East Development Commission, NEDC, the Ministry of Humanitarian Affairs, which is effectively a “Ministry of Northern Affairs” and other agencies, are operating unfettered.

“These situations cannot be allowed to continue. Enough, truly, is Enough!

“PANDEF, therefore, fully endorses the Demands of the people of Gbaramatu Kingdom, Itsekiri and the Urhobo Groups, over any consequential, legitimate, action or process, they may take to secure equity, justice and economic betterment for their peoples.

“We urge them not to waiver; they should remain resolute and steadfast.

“We advice the Federal Government to heed their Demands, and urgently put in place modalities to holistically address the Niger Delta issues. President Muhammadu Buhari must act, rightly, fast!”, PANDEF said in the statement.