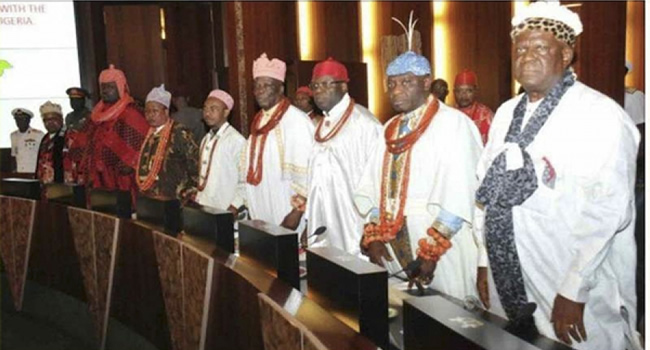 The Pan Niger Delta Forum (PANDEF) has lauded the resolutions made by the governors of Southern part of Nigeria following a meeting in Delta State on Tuesday.

Ripples Nigeria had reported that the Governors, who met mainly because of the worsening security situation in the country, made a 12-point resolution, which includes a ban on open grazing in the region.

The Governors also questioned some of the appointments made by the President Muhammadu Buhari government, as they resolved to push for federal character to be observed henceforth.

Reacting to the issues raised, the national publicity secretary of PANDEF, Hon. Ken Robinson, in Port Harcourt on Wednesday, said the Governors did well by meeting although it was long overdue.

He said the declaration of a ban to open grazing in Southern states was apt, noting that the practice was already outdated.

“With the goings-on in the country, we had expected them to meet before now but it is a good thing that they have met,” he said.

“This would not only foster cooperation among the governors and people of the southern states but also strengthen the nation’s democracy.

“Their resolutions re-emphasized our positions, particularly, on restructuring, open grazing, and the alarming state of insecurity.”

Robinson added: “PANDEF has repeatedly said that open grazing was outdated and should not be allowed to continue in a society like ours today.

“Those who are involved in he business should realize this and employ other ways of doing the business as it is done in other developed or developing countries. The days of open grazing are over and the sooner those who are in that business realize it, the better for all of us.”

The PANDEF chieftain went on to express regrets that the people of the South live their lives in fear, adding that it was pleasing and reassuring that the governors touched on all the matters affecting the people.

He said: “Citizens now live in fear and are no longer able to freely pursue various livelihoods, across the country, due to the security situation.

“The governors also accentuated the issue of skewed appointments into federal government agencies, include security agencies.

“Recall that PANDEF National leader, Chief Edwin Clark, and 15 other prominent Nigerians are in Court with the Mr. President, over the serial breaches of the federal character in appointments by this administration.

“It is therefore pleasing and reassuring that the governors discussed these issues at their meeting and made those far-reaching resolutions.

“The positions they have taken are in tandem with the thoughts and expectations of the people of Southern Nigeria. So, PANDEF commends them for the elaborate decisions reached. ‘Kudos’ to the Southern Governors.”