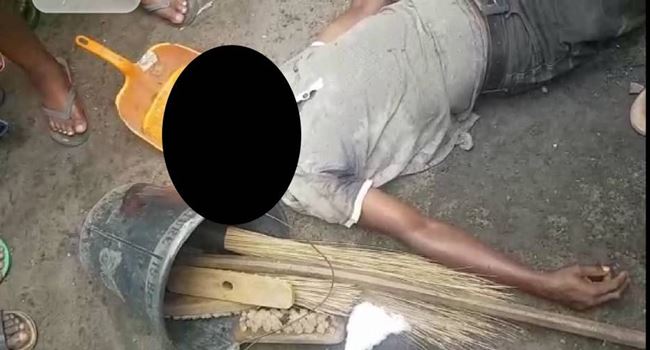 Pandemonium broke out in Ilupeju area of Lagos, on Monday when an officer of Special Anti-Robbery Squad (SARS) Akeem Mohammed attached to Ladipo Police division on Monday allegedly killed one Francis Emin, a member of Christ Apostolic Church, Ilupeju, Lagos.

It was gathered that the deceased was on his way to his work when bullets from the SARS officer killed him  at Ajisegiri Street, Ilupeju, around Oshodi, Lagos.

According to the eye witness of the incident, Francis was struck with the bullet from Akeem who is also called Skoda while men of the SARS were chasing some hoodlums in the area.

The SARS operatives were said to have shot sporadically while chasing the hoodlums and a bullet hit Akeem.

“They killed the poor man out of their carelessness. How will a police officer be shooting in the midst of people because you are chasing some hoodlums or suspects? That is barbaric. The man died immediately he was caught by the bullet. The good Samaritan that wanted to save his life could not even do anything before he gave up the ghost. And this is a poor hunchback person that was sweeping people’s houses for survival. I hope they will seek justice for him before they turn the story around”, an eye witness who simply identified himself as Maroof said.

Another resident of Ajisegiri who spoke with our correspondent at the scene of the incident, Jamiu Oladele, said police officers were careless with their operation.

He said “The man was killed by the SARS men out of their wicked and unprofessional act. We were all here when we heard the gunshot as if it was a war zone. Few minutes after, we heard the noise that one person was killed. Unfortunately, it was the poor man going on the street that was killed. I think it is time the government should scrap this SARS, they are not better than killer herdsmen killing people around the country”.

It was also gathered that police operatives from Area F later came to the scene and whisked the deceased away with his younger brother.

Further findings revealed that Francis until his death was a member of Christ Apostolic Church Men Association (CACMA) who resides at 11 Shobayo Street, Ilupeju.

Meanwhile, a release by the office of Lagos State Police Public Relation officer, Bala Elkana, said that the deceased was killed by some cultist who laid ambush on SARS operative led by Mohammed Akeem.

But the authority of Christ Apostolic Church, Victoryland, Ilupeju, Lagos while responding said it will demand justice over the matter.

According to them, Francis’ death could have been averted if the SARS operatives were diligent in their conduct, thereby understanding that shooting sporadically in the public could cost an innocent life.

Elder Kayode Omotoso, a member of the church council while speaking on the incident said “ I was at the scene before they moved the corps away, and everyone on the street attested to it that it was Akeem Skoda that shot him dead. I phoned the area commander that we have to get justice. This is a committed church member who was going to his workplace for survival.

He went further that “We will not allow the case to just go like that. We have already contacted our lawyer to rise to the occasion. We will seek justice for our member because he was not a criminal”.