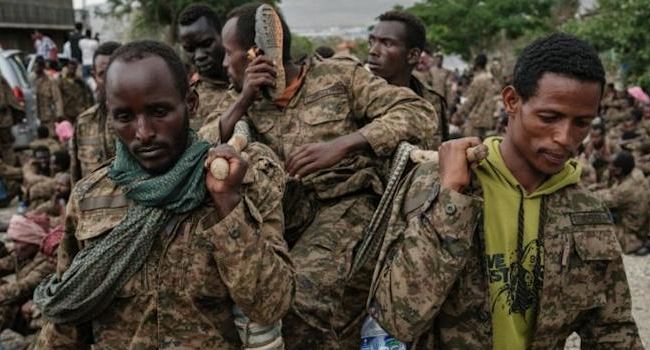 Residents of Addis Ababa, Ethiopia, have been thrown into panic after Prime Minister Abiy Ahmed announced a nationwide state of emergency on Wednesday, and ordered them to prepare to defend their neighbourhoods amid fears that Tigrayan rebels were heading for the capital.

In a statement released Wednesday, Abiy accused the rebel alliance of trying to turn Ethiopia into Libya and Syria, adding:

“They are set to destroy a country – not to build it.”

He also urged citizens to support the war effort, saying:

“Victory over the threat posed by our enemies is unattainable if we do not work together.”

The nationwide state of emergency was declared by the government as a measure that came after several days of reported advances by the Tigray People’s Liberation Front (TPLF) rebel group, which is locked in a brutal year-long war against Ahmed’s government.

“The state of emergency is aimed to protect civilians from atrocities being committed by the terrorist TPLF group in several parts of the country,” state-affiliated Fana Broadcasting Corporate reported.

“We do not want the fate of Dessie here in Addis Ababa. Some insurgents have entered the capital. We need to identify them, otherwise, I do not doubt that what happened in Dessie will happen in Debre Berhan and Addis Ababa,” it added.

“These people are eating and drinking with us and they are enemies of Ethiopia and they need to be dismissed and to do that, all of us need to cooperate with the state of emergency accordingly.”

Possible restrictions, going by the terms of the law, include a curfew, road closures and searches of “anyone suspected of collaborating with terror groups”, according to Fana.

Meanwhile, an Oromo group allied with Tigrayan fighters has announced that Addis Ababa could be overrun by rebels within “months if not weeks”, as they advance southwards.

Odaa Tarbii, spokesman for OLA, which has also claimed recent advances in Amhara and in the Oromia region surrounding Addis Ababa, said his group intended to topple Abiy’s government, calling his removal “a foregone conclusion”.

“If things continue in the current trajectory, then we are talking about a matter of months if not weeks,” he said, referring to OLA’s move on Addis Ababa.