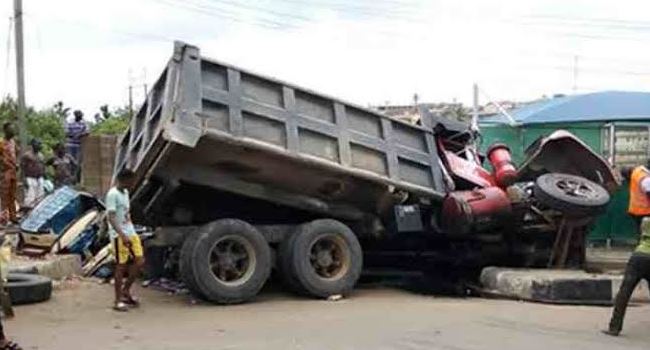 There was palpable fear in the commercial town of Onitsha in Anambra State, when a truck loaded with live ammunitions and bullets fell off an articulated vehicle on Sunday.

The Mercedes Benz 911 truck reportedly fell along Awka road in the city with cartons of the bullets spilling into the drainage when it skidded off the road after a downpour, sending residents into panic.

According to eyewitnesses, the situation sent the residents scampering for safety while heavy armed security men were drafted in to cordon off the scene

It was gathered that the truck was moving the goods out of Onitsha to a yet-to-be identified location when the driver lost control and skidded off the road, making it fall into a ditch.

“Immediately after the truck fell, the driver and his conductor who sustained minor injuries tried to evacuate and conceal the contents but they were apprehended when some people suspected the contents of the cartons and quickly raised an alarm.

“It was discovered that the contents of the cartons were live bullets and ammunitions and the police was called. The driver was arrested while the conductor managed to escape,” one of the eyewitnesses said.

The state police spokesman, Ikenga Tochukwu, who confirmed the incident, however said it was one carton of bullets that was being conveyed by the truck, adding that he had not been properly briefed on the situation.

But a senior police officer, who spoke on the condition of anonymity, said all the cartons spilled by the truck contained ammunitions and bullets contrary to what the police spokesman said.

“We are going to get to the root of the matter. The conductor is equally being trailed. It’s a very difficult time for everybody and people have to be careful,” he said.

Observers have expressed fears that the bullets may have been transported into the state with the forthcoming governorship elections in the state. There are fears that some politicians could have ordered for the ammunitions for use by their thugs to intimidate opponents before, during and after the elections which has been causing serious concerns for security agencies.