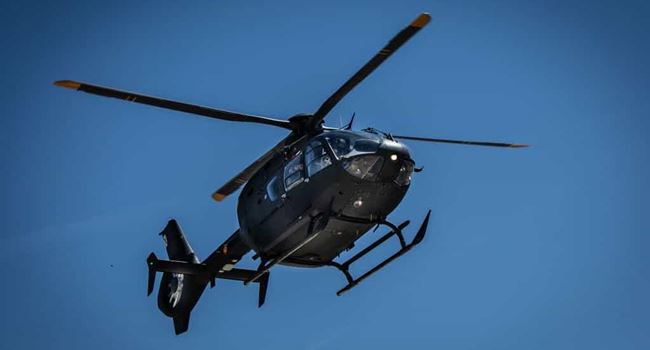 Residents of some villages in Kontagora local government area of Niger State, have been thrown into panic following the sighting of a strange helicopter said to have been hovering around villages for two days.

This is coming on the heels of rumours linking former military head of state, Abdulsalami Abubakar, to an helicopter allegedly dropping weapons and supplies for bandits in some locations in the state, a rumour he has since come out to debunk.

The recent helicopter was sighted on Tuesday, hovering above a vast plot of land belonging to the Nigerian Army in Kontagora, said to have been taken over by armed bandits terrorizing several parts of the state.

The bandits are said to have established their camps at Matan Kari, Fagai, Ozowo, Bihima and Kan Libo, among other mountains inside the army land.

However, reacting to the tension being created by the hovering aircraft, a senior Army officer told Daily Trust that it was on a reconnaissance mission to locate the camps and weed out the bandits, adding that the Nigerian Army is taking measures to deploy extra troops to the state to protect the citizens.

The officer who did not want his name in print as he does not have the authority to speak, said the situation at the army’s vast land and communities worst hit by banditry is being looked into for prompt actions.

“I am aware that the Nigerian Army under the current leadership of Chief of Army Staff, Lt General Ibrahim Attahiru, has given directives on the need for the fencing, especially some strategic portions of the land since a foundation pit has already been dug.

“The military high command is also considering the probability of building Satellite Camps and even Super Camps in various places within the land.

“The interesting thing now is the fact that there has been a tremendous synergy of the military, the police and other security agencies across the entire Niger State, not only within Kontagora and Mariga local governments.”