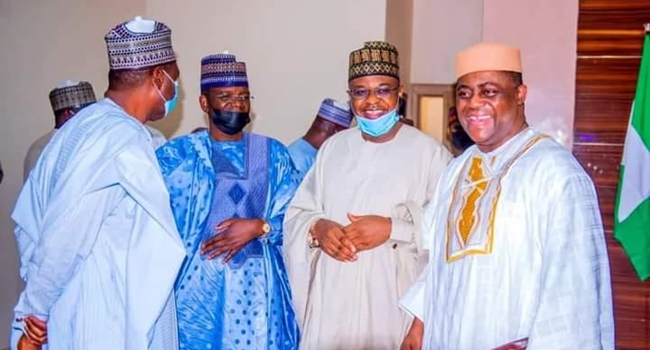 A few months after taking swipes at the Minister of Communications and Digital Economy, Isah Pantami, former Aviation Minister, Femi Fani-Kayode, has fiercely defended his attendance of the wedding of President Muhammadu Buahri’s son, Yusuf, in Kano on Friday where he was seen hobnobbing and taking pictures with Pantami.

Back in April, in the heat of an allegation that Pantami was an open sympathizer of terrorist groups, Fani-Kayode, popularly known as FFK, had come out firing from all cylinders, describing the Minister as a ‘Jihadist’ and supporter of killer insurgents in the country.

Among other things, FFK had said:

“Pantami is not only a cold-blooded beast not fit to be a Minister of the Federal Republic, but he is also not fit to walk our streets freely because he presents a grave danger to our people and our society.

“He is a Jihadist who supports their ideology coupled and embedded with the foreign Fulani terrorists and bandits that have plagued our land, that are killing our people, that are tormenting our farmers, that are raping our women and that have a strange and inexplicable affection for cows.”

But when photos of himself and Pantami surfaced during the wedding, FFK decided to play the peace maker and stated that politics is not war, but about “bridge-building”.

Taking to his Facebook page, the former Minister said he can be friends with his political enemies and anyone who has an issue with that can ‘go and die’.

“Politics is about bridge-building regardless of your differences. It is not war. You can be friends with your political adversary and still disagree,” he wrote.

“It’s called politics without bitterness and being civilized… Are you still foaming at the mouth because I shook hands with Isa Pantami? Keep foaming and let your blood pressure go higher.

“If you like drop dead. I offer no apology or explanation and I need no validation from you. You either trust my judgement or you do not and either way I do not care. You see my faith teaches me to forgive those that express regrets about their past actions and utterances and to be at peace with as many people as possible.

“It also teaches me to shake a hand when it is extended to me in friendship. The bottom line is as follows: you can do and say your worse. You can vent until you wee in your pants. You can wail until you defecate in your trousers. You can scream and shout from morning till night.

“You can run up and down like a weather beaten and rain soaked chicken whose head has been cut off until you collapse. You can do all these things simply because I took a picture with a fellow Nigerian and called him my friend and brother.

“It does not move me and it changes nothing: though we may not agree on everything, Isa and I are now friends and we will remain friends. Live with it or die with it. If most of you had 10% of my courage and foresight, Nigeria would be a far better place. History will vindicate me and posterity will judge us all.

“You do not know what I know and you do not see what I see. You assume the worse because you are the worse. Whatever you choose to say or do, I don’t care. All I know is that I will never prostitute my principles or compromise my stance on fundamental issues and I will disagree with those that I choose to disagree with but I will never be driven by hate or be deaf, dumb and blind to reason.

“And unlike most of you, I can never be a coward. I have the courage to be civil and to be civilised to those that offer me respect and friendship, even if we do not agree on all things. The question, is do you?”

SERAP sues Buhari, others over missing N106bn in 149 MDAs