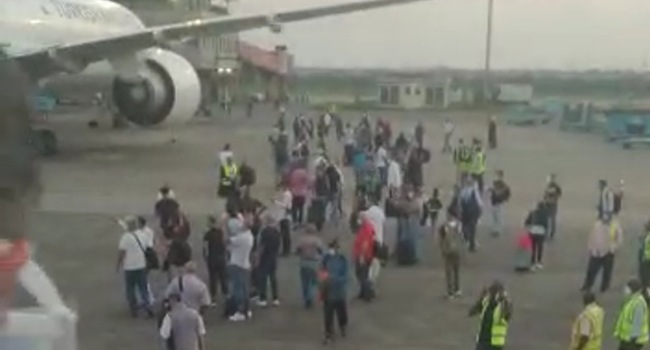 A Middle East Airline passenger on Wednesday was involved in a minor accident with a Turkish cargo plane at the Muritala Mohammed International Airport, Lagos.

According to eyewitnesses, the Turkish cargo flight was parked on the tarmac when the Middle East airbus ran into it.

Spokesman for the Accident Investigation Bureau (AIB), Tunji Oketumbi, confirmed the incident, adding that the bureau was yet to determine the level of involvement as of press time.

He said: “I am aware that it happened but officially I do not have the details. We at the AIB investigate aircraft accidents and serious incidents. Right now I do not know the level of involvement.

“We are yet to ascertain our level of involvement now. If it is a minor incident.

“It will be determined by the Nigeria Civil Aviation Authority.

“It depends on the level of damage. If it does not affect the flight operation of either of the airport, we may not be involved.”

According to reports, the MEA aircraft was preparing to take off on an evacuation operation, leading to the inability of the plane to take off.